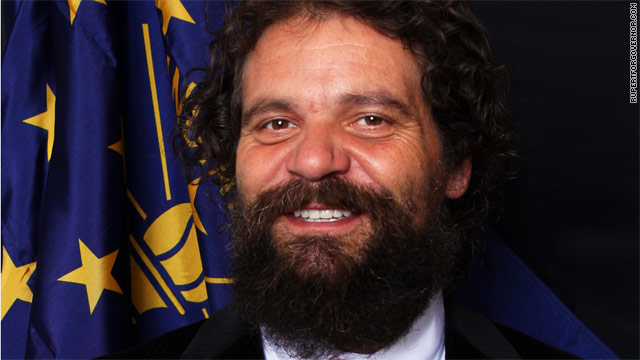 Washington (CNN) – A former "Survivor" contestant is throwing his hat in the ring to be Indiana's next governor.

Rupert Boneham, a participant in three separate seasons, most notably the winner of the "fan favorite" contest in the show's 20th season, is seeking the nomination of the state's Libertarian Party.

“It’s time for a change in Indiana. Hoosiers have consistently voted in professional politicians and look at the results,” Boneham said in a campaign press statement.

“I am in a unique position to bring together Hoosiers of all walks of life to serve our state. I am not beholden to any special interests.”

The small business owner and founder of a non-profit organization to help at-risk youth formed an exploratory committee back in August. Boneham will officially file as a gubernatorial candidate Friday, his campaign manager Evan McMahon told CNN Wednesday.

Boneham would like to reform the state’s criminal justice system, particularly with regard to non-violent victimless offenders who he views “as people that can be helped,” McMahon explained.

Boneham will reform the path that turns these offenders into “career criminals,” he continued.

Under the spending initiatives on the campaign website, Boneham vows to "create a merit-based pay scale for state employees."

With regard to his tax platform, the gubernatorial hopeful is arguing that "by migrating to a single rate, consumption based tax system (sales tax) for only brand new products and services, we could lead the nation in setting a pro-growth economic environment while reducing the burden and overhead, for both the State and Hoosiers, of collecting tax revenues."

While Indiana’s Libertarian Party remains neutral on all candidates until delegates select a nominee at the party convention in April, a party leader told CNN Wednesday Boneham was an “exciting prospect” for the party and would “bring a lot of attention to the Libertarian message.”

The Hoosier State's incumbent Gov. Mitch Daniels, a Republican, has reached his term limit, making it an open-seat election.

Indiana Rep. Mike Pence and former Hamilton County councilman and businessman Jim Wallace are vying to be the Republican nominee in the election.

In the Democratic primaries, former Speaker of the Indiana House of Representatives John Gregg will compete.

McMahon says Boneham will support the Libertarian candidate in next year’s presidential election.