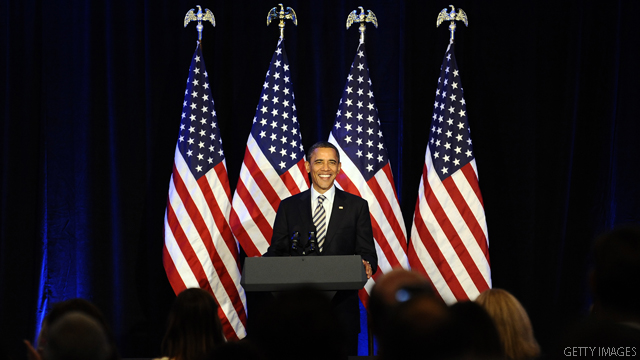 (CNN) - A new poll suggests President Barack Obama has the advantage right now over three of his possible GOP opponents in next year's election in an important battleground state.

According to a Quinnipiac University poll of Ohio voters, Obama holds a four point margin over former Massachusetts Gov. Mitt Romney in a hypothetical 2012 general election matchup. The president's 45% to 41% margin over Romney is within the survey's sampling error. The poll indicates that Obama holds a 47% to 39% advantage over businessman and former Godfather's Pizza CEO Herman Cain and has a 47% to 36% lead over Texas Gov. Rick Perry.

But according to the survey, only 43% of Ohio voters approve of the job the president's doing in office, with 51% saying they disapprove of how he's handling his duties in the White House. And by a 49% to 44% margin, Ohio voters say Obama doesn't deserve a second term in office.

"Ohio voters are not happy with the president's performance and don't think he deserves a second term. But elections are about choices," said Peter Brown, assistant director of Quinnipiac University polling. "At this point none of the Republicans are able to take advantage of these presidential negatives. The next year will determine if the GOP is able to nominate a candidate who can do so."

Ohio's 18 electoral votes are expected to be pivotal in the 2012 presidential election. George W. Bush sealed his 2004 re-election by narrowly winning the state over Sen. John Kerry. In 2008, Obama beat Sen. John McCain in the state by 5 points. But the GOP won big there in last year's midterm elections, taking back the governor's office and five House seats held by Democrats.

In the battle for the Republican nomination, the poll indicates 28% of Republican primary voters say they would support Cain, with 23% backing Romney, who's making his second bid for the White House. All other candidates listed on the questionnaire are in single digits, with Perry near the bottom of the list at 4%.

"Herman Cain's rise has been meteoric. He has increased his share of the vote among Ohio Republicans four times since Quinnipiac University's September 28 survey in which he registered 7 percent," added Brown. "Gov. Mitt Romney hasn't moved and Rick Perry has fallen off a cliff, down to 4 percent from 20 percent."

Ohio is in the process of moving its presidential primary to June, which would be at the end of the primary and caucus calendar.

The Quinnipiac University poll was conducted between Oct. 17 and Oct. 23, with 1,668 registered voters, including 542 Republican primary voters, questioned by telephone. The survey's overall sampling error is plus or minus 2.4 percentage points.