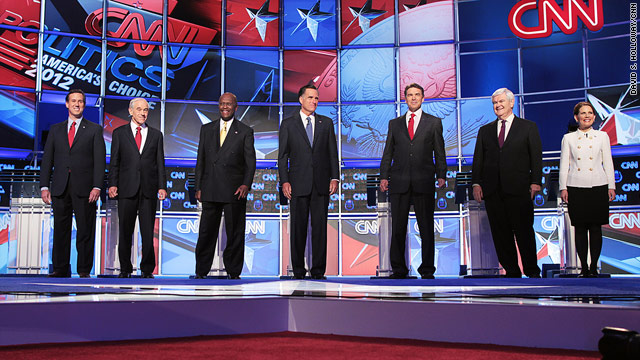 Poll: Romney at or tied for top spot in first 4 states to vote

(CNN) - Mitt Romney is on the top or tied for the lead in the race for the Republican presidential nomination in new surveys in the first four states to vote in next year's primary and caucus calendar.

According to CNN/Time/ORC International polls released Wednesday, the former Massachusetts governor continues to be the overwhelming front-runner in New Hampshire, holds a lead over the other GOP presidential candidates in Florida, and is basically tied for the top spot with businessman Herman Cain in Iowa and South Carolina.

But the surveys indicate that many Republican voters are still far from decided.

"Only about a third of all respondents in the surveys say their minds are made up," says CNN Polling Director Keating Holland.

In Iowa, which will hold its caucuses on January 3 and is traditionally the first state to vote in the race for the nomination, 24% of registered Republicans say they are backing Romney, who's making his second bid for the presidency, with Cain, the former Godfather's Pizza CEO and radio talk show host, at 21%. Romney's three point margin is within the survey's sampling error.

According to the Iowa poll, 12% support Rep. Ron Paul of Texas, who is making his third run for the White House, with former House Speaker Newt Gingrich and Texas Gov. Rick Perry each at 10%, Rep. Michele Bachmann of Minnesota at 6%, former Sen. Rick Santorum of Pennsylvania at 2%, and former Utah Gov. and ambassador to China Jon Huntsman at 1%.

The Iowa caucuses are closed, meaning only registered Republicans may participate.

The New Hampshire survey indicates that Romney remains the overwhelming favorite in the Granite State, which holds the first-in-the-nation primary and traditionally votes second after Iowa. Romney is well known in New Hampshire. He owns a vacation home in the state, and was governor of neighboring Massachusetts. Much of southern New Hampshire is in the Boston media market.

According to the New Hampshire poll, conducted among registered Republicans and among registered independents who voted in the 2008 GOP primary, 40% say if the primary were held today, they would cast ballots for Romney, with Cain at 13%, Paul at 12%, Huntsman at 6%, followed by Gingrich at 5%, Perry at 4%, Bachmann at 2% and Santorum at 1%.

It's a dead heat in South Carolina, which will hold its primary on Jan. 21 and traditionally is the first southern state to vote along the road to the White House. According to the poll in the Palmetto State, Romney has the support of 25% of self-identified Republicans or independents who lean towards the GOP, with Cain at 23%. Romney's two-point margin is well within the survey's sampling error.

Paul follows at 12%, with Perry at 11%, Gingrich at 8%, Bachmann at 4% and Huntsman and Santorum each registering at 1%. South Carolina has no party registration and all registered voters may participate in January's GOP primary, but self-identified Democrats rarely vote in the Republican contest.

Florida will hold its primary on January 31, voting fourth in the primary and caucus calendar. According to the poll, three out of ten Republicans say they back Romney, with Cain at 18%. Gingrich and Perry each grab 9% support, with Paul at 6%, Bachmann at 4%, and Huntsman and Santorum at 1%.

Florida has a closed primary, allowing only registered Republicans to participate.

The new state polls mirror the most recent national surveys, with Romney and Cain the top two candidates.

Only about a third of the respondents in any state say their minds are made up, and that number drops to just 23% in Iowa. Meanwhile, in New Hampshire and Florida one in seven voters are still assessing the field and don't favor any candidate yet.

"And one more thing to remember: Polls taken this far away from a contest are not, and cannot be, a prediction of the ultimate outcome, or even a very good guess of who will turn out to vote next year," says Holland.