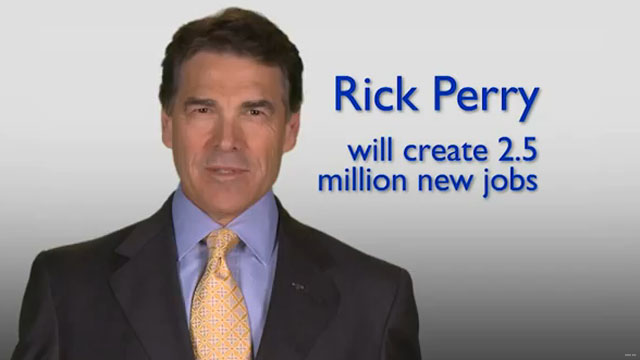 Washington (CNN) – Looking straight into the camera for much of his ad, Rick Perry pledges to create two and a half million jobs and touts his Texas record in his first paid commercial buy which began Wednesday.

The spot, part the Texas governor's effort to jump start his languishing Republican presidential bid, will air statewide in Iowa on commercial and cable television.

While Perry has increasingly attacked rival Mitt Romney over various issues, the Perry camp decided its first foray into paid television should focus more on Perry and introducing him and some of his economic proposals.

With $15 million in the bank as of Sept. 30, Perry's advisers still have a lot of money to work with, and political analysts have said he probably will have to go negative sooner rather than later in order to help him regain momentum.

While the ad does not mention his new flat tax proposal unveiled Tuesday, the Texas governor hopes a focus on jobs will enable him regain momentum in the Republican presidential nomination fight as his poll numbers both nationwide and in key early voting states have declined dramatically in the last few weeks due at least in part to his weak performances in recent debates.

Saying "I know something about" job creation, he highlights his economic track record. "In Texas we've created over one million new jobs while the rest of the nation lost over two million."

In the commercial he emphasizes in general terms some of his energy proposals including opening oil and gas fields and eliminating regulations that he says hurt domestic production.

Team Romney pushed back on the ad by issuing a fact of Perry’s record in Texas.

“Today’s campaign ad doesn’t tell the whole story, failing to mention that unemployment in Texas has doubled on Perry’s watch and more than a million workers in his state are out of a job,” Romney Communications Director Gail Gitcho said in a statement. “Mitt Romney is a conservative businessman who is focused on getting Americans back to work and reviving this economy.”