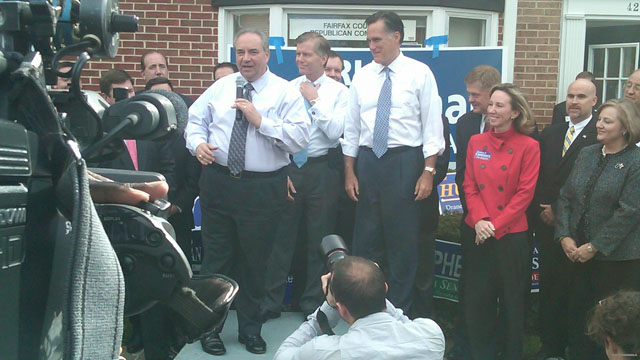 (CNN) - Republican presidential candidate Mitt Romney on Wednesday expressed his support for a referendum that would curb collective bargaining rights for public employees in Ohio, after he avoided directly weighing in on the battle Tuesday.

"I support question two and Gov. Kasich's effort to restrict collective bargaining in Ohio in the ways he's described," Romney said at an event in Virginia Wednesday. "So I fully support that."

He also apologized if he created any confusion with his earlier comments upon which rival candidate and Texas Gov. Rick Perry quickly pounced.

"As a true conservative, I stand with Gov. Kasich in promoting S.B.5 for fiscal responsibility and job creation in Ohio," Perry said in a statement to CNN Tuesday. "Gov. Kasich and the Republican leadership of Ohio are to be commended for their efforts."

During an appearance Tuesday in Ohio, Romney issued generic support for Kasich's efforts to curtail union rights, but he would not say whether he supported or opposed the specific measures.

"I am not speaking about the particular ballot issues," Romney said Tuesday, only after repeated questions from reporters. "Those are up to the people of Ohio. But I certainly support the efforts of the governor to reign in the scale of government. I am not terribly familiar with the two ballot initiatives. But I am certainly supportive of the Republican Party's efforts here."

Two hot-button measures that will be on the Nov. 8 ballot are attracting attention from those on both sides of the political aisle.

One of them, Issue 2, would overturn Senate Bill 5 –the controversial legislation backed by Republican Gov. John Kasich that curbs collective bargaining rights for public employees.

Another measure, Issue 3, would amend the state constitution to forbid the state and federal government from imposing a mandate to buy health insurance.

- CNN's Peter Hamby and Alison Harding contributed to this report.