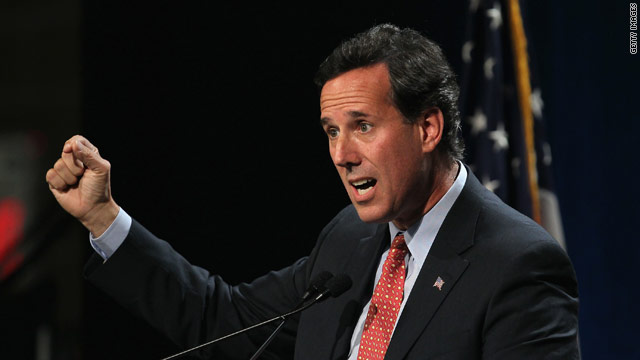 New York (CNN) - Speaking at an education forum with three other GOP presidential candidates Thursday, former Pennsylvania Sen. Rick Santorum took a dig at the campaign of Texas Gov. Rick Perry, who was not at the forum, for suggesting Perry might pass on some debates.

"I would never skip a debate. I would never skip an opportunity to let the American public know what I think about these issues," Santorum said while talking to reporters following the Education and Election 2012 Presidential Candidate Forum, hosted by The College Board and News Corporation.

Following a string of less-than-stellar debate performances by its candidate, Perry's campaign floated the idea that he may participate in fewer formal debates during the remainder of the 2012 political season. Communications director Ray Sullivan told CNN Wednesday that Perry could use more time with voters in key early voting states, instead.

He's committed to a November 9 debate in Michigan, but none after that, as of now.

"I'm all about people digging deeper, people getting to know the candidates," said Santorum, adding "hiding from the public, from skipping debates and skipping forums like we've seen several of the candidates do here today is trying to hide the ball."

All of the GOP presidential candidates were invited to attend the forum. Santorum and former House Speaker Newt Gingrich participated in person in New York, while Minnesota Rep. Michele Bachmann and former Godfather's Pizza CEO Herman Cain appeared via satellite.

Trailing behind his opponents in the polls and with a thin campaign coffer, Santorum declared, "I'm about transparency, talking directly to the American public and getting to the chance to see who I am and what I believe, and not hiding behind 15- or 20-million-dollar ads to try to sell me to the voters."

The swipe was an apparent knock against Perry releasing his first paid ad on Wednesday, pledging to create 2.5 million jobs.

Gingrich added it would be a "huge mistake" for Perry not to debate, saying candidates need to be able take the stage now if they plan to debate Obama in the future.