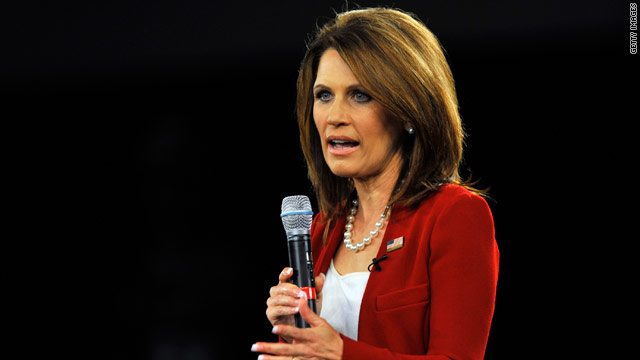 "It's time for Michele Bachmann to go," reads the first line of a statement from American Majority President Ned Ryun. His group operates in seven states, trains thousands of tea party supporters and is "liked" by over 371,000 people on Facebook.

"Bachmann, the leader of the so-called tea party caucus in the House and the most vocal about her affiliation with the Tea Party than any other Presidential candidate, has consistently presented herself as a champion of the movement and its values," Ryun's statement continued.

"Bachmann has ridden her tea party credentials from obscurity to a national platform like no other."

"The strength of the Tea Party is all individual's opinions are valued but the no single leader speaks for it. Mr. Ryun, who supports Texas Gov. Rick Perry, is entitled to his own opinion. And that's exactly what he is expressing. Michele Bachmann enjoys strong support from Americans across party lines and that certainly includes the Tea Party. She will continue to be a strong advocate for the values and principles reflected by the Tea Party as works toward a victory in the first-in-the-nation Iowa caucuses as she seeks to win the Republican nomination."

Ryun denies he supports Perry, telling CNN: "I liked his plan that he came out with earlier in the week. And I said as much in a blog post. But I have not, and neither has American Majority endorsed anybody."

American Majority's rebuke of Bachmann marks the first time a well-known tea party group has turned on one of its own in the presidential race – a candidate who so frequently pushes tea party values it's become a key underpinning of her White House bid.

The group explained its reasons why it's grown incensed with Bachmann.

"Anyone who knows the congresswoman, and knows her record, we appreciate a national figure standing up for the tea party types," Robbins added.

Robbins said the statement is not about the group favoring one candidate over Bachmann.

"We are equal opportunity hecklers." Robbins said. "We point out the foibles and the flaws in each one of the candidates. And we don't care which one of the personalities wins, as long as they're conservative."

"Let's face it: she's a back-bencher and has been a back bencher congressperson for years," Robbins added. "This is not a serious presidential campaign."

Bachmann won the first major contest of the presidential cycle, August's Ames Straw Poll in Iowa. The Minnesota congresswoman has also won some good reviews for her performances in presidential debates. And, though her polling fortunes have recently tumbled, many campaign watchers believe Bachman's candidacy cannot be dismissed.

The group explains another reason it believes Bachmann should quit the GOP presidential race.

"Bachmann's resulting plunge in the polls is troubling for the tea party, not because 'one of their own' is losing her footing, but because the longer Bachmann stays in the race, the more likely we will see her shift to the right," Ryun wrote in the statement. "This rightward shift will come as the campaign works to hold on to its more conservative base of support in advance of the release of Bachmann's new book next month."

Ryun continued: "There is nothing wrong with addressing your base during a campaign. However, I suspect that we will hear more from her about social issues and religion to accomplish that goal. As an evangelical who is deeply pro-life, I can say that while many inside the tea party movement are socially conservative, social issues are not what drive the Tea Party."

Since the movement's founding in 2009, activists and supporters have tried to squarely focus on constitutional adherence, fiscal responsibility and lower taxes. Activists typically steer clear of social issues like abortion and gay marriage. While Bachmann frequently pushes the tea party's message on fiscal issues, she's recently stressed her opposition to abortion rights and her defense of traditional marriage.

"In Bachmann's case, it is clear that the campaign has become less about reform and more about her personal effort to stay relevant and sell books; a harsh commentary, but true," Ryun wrote. "While other campaigns are diving into the substance, the supposed tea party candidate Bachmann is sticking to thin talking points and hanging on for dear life."

When contacted about the statement, some other tea party groups remain largely positive about the Bachmann candidacy.

"I haven't heard of any local tea party groups calling for Michele Bachmann to bow out," Martin said. "Michele Bachmann has fought and championed the tea party core values - the fiscal responsibility, the constitutional and limited government and free markets on Capitol Hill – oftentimes when very few others were willing to take up the mantle. And tea party supporters appreciate her for championing their cause repeatedly and consistently."

As for criticism of Bachmann's focus on social issues, Martin said, "When you're running for president, you're appealing to more than just tea party people. And you have to answer questions on other issues as well. So I'm not surprised when any of the candidates are talking about the other issues because those are things that come up in presidential campaigns."

Levi Russell, director of public affairs for Americans for Prosperity, said, "The conservative movement across the country has not made up its mind about any one particular candidate.

"I think it's too early to call for anybody to drop out," Russell added.