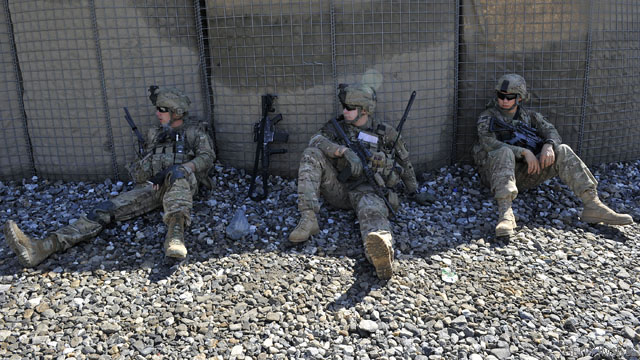 US army soldiers from Bravo company 2nd Batallion 27th Infantry rests before a mission with the Afghan army at Outpost Monti in Kunar province, on September 20, 2011.
October 28th, 2011
11:44 AM ET

CNN Poll: Support for Afghanistan war at all time low

Washington (CNN) - As the war in Afghanistan passes the ten-year mark, a new national survey indicates that support for the conflict has dropped to an all time low as a growing number of Americans express concern that the situation in the central Asian country has turned into another Vietnam.

According to a CNN/ORC International Poll released Friday, only 34% of the public says they support the war in Afghanistan, one point less than the previous low of 35%, with 63% opposed to the conflict.

"But that opposition is not a reflection of the original decision to get involved in Afghanistan a decade ago," says CNN Polling Director Keating Holland. "It's what Afghanistan has turned into in the subsequent decade that has soured Americans on the war effort there."

The survey indicates that 57% say it was not a mistake to send military forces to Afghanistan in October 2001, several weeks after the September 11th terrorist attacks.

But according to the poll, 58% now say that the war in Afghanistan has turned into a situation like the U.S. faced in Vietnam, six points higher than the number who felt that way a year ago.

The survey also indicates partisan and gender gaps over the conflict.

"The war in Afghanistan is perhaps the one remaining policy on which President Obama and Republicans agree," says Holland. "Six in ten Republicans still support the war, compared to only a quarter of Democrats and independents. Support is also much higher among men than women, although a majority of both groups oppose the war."

The poll was conducted for CNN by ORC International from Oct. 14-16, with 1,007 adult Americans questioned by telephone. The survey's overall sampling error is plus or minus three percentage points.