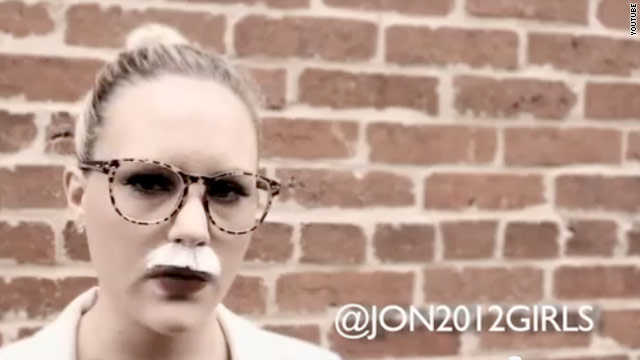 Responding to Cain's controversial web ad –where his chief-of-staff, Mark Block, took the most talked-about cigarette drag all week– Huntsman's three girls released their own spoof this week, this time blowing bubbles, not smoke.

Cain's video has since gone viral, collecting more than a million hits on YouTube and serving as fodder for late-night TV comedy.

And now the Huntsman girls are getting in on the fun, too.

Liddy, Abby and Mary Anne, better known on Twitter as @Jon2012girls, have created a popular presence on the campaign trail as they talk up their dad, former Utah governor and former U.S. Ambassador to China.

In the video, the girls mimic Block's look by wearing fake mustaches and big glasses while they talk in the same monotonous, serious tone that Bock used in the original ad.

"We strongly believe that our dad has the experience and proven track record to revive America's economy and create jobs," Abby said. "Even if we didn't believe that, we'd still have to be here."

The one-minute video features all three daughters taking turns, with the background music being the same "I am America" song as the one in Cain's ad.

"We are shamelessly promoting our dad, like no other candidate's family ever has," Mary Anne said. "But then again no one's ever seen a trio like the Jon 2012 girls."

Near the end, just when Block famously lit up, the girls blow bubbles, instead.

But Huntsman's daughters passed on mocking another unusual part of the original ad–Cain's nearly 10-second long smile at the end.

Huntsman's campaign said they had no part in making the video but supported the girls' creativity.