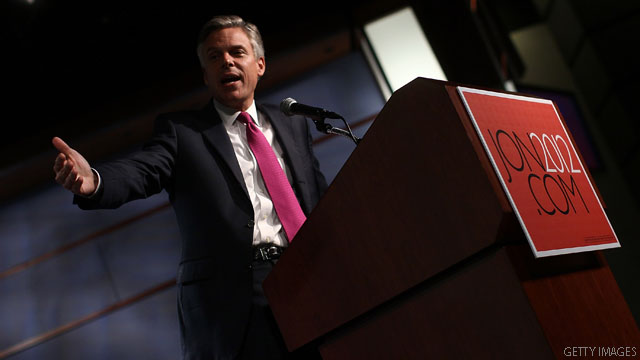 The former Utah governor called Mitt Romney a "perfectly lubricated weather vane" and Herman Cain "the flavor of the week," in an interview with Wolf Blitzer.

Huntsman continued popular criticism of Romney, the former Massachusetts governor, by accusing him of changing his positions on issues including Libya, the debt ceiling and Ohio's bill to limit the collective bargaining rights of union workers.

"You can't be a perfectly lubricated weather vane on the important issues of the day," Huntsman said. "Romney has been missing in action in terms of showing any kind of leadership."

"I do believe that the electorate this go around will be looking for clearly defined presidential leadership and I'm not sure we're seeing that," Huntsman added.

The former U.S. ambassador to China who has received single digit support in national and state-wide polls also suggested Cain's rise in recent polling is temporary.

"Oftentimes you can spike for the moment, you're the flavor of the week or the flavor of the month," Huntsman said. "I remember when Gov. Perry was at 20% in New Hampshire. He came with great fanfare, now he's in the low single digits."

- Watch the full interview with Huntsman on CNN's "The Situation Room" at 4 p.m. ET.