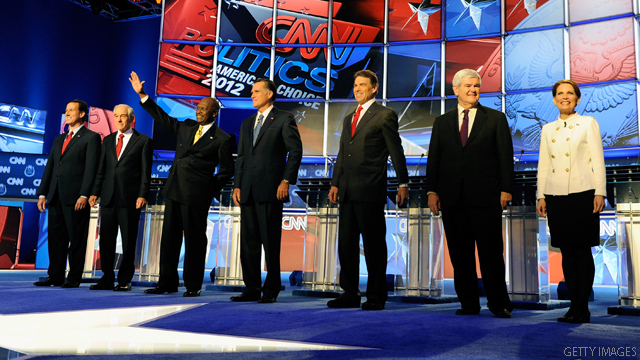 (CNN) -– The chief of the Republican National Committee said Friday that he isn't worried about a split in his party between moderates and supporters of the tea party movement.

“I don't think anything is split at all,” RNC Chairman Reince Priebus said on CNN’s “Erin Burnett OutFront.”

“You the have a party here that has multiple candidates running for president and you're going to have some people supporting one over the other," Preibus said. "That doesn't mean there isn't complete unanimity in the fact that we need to save this country from a president who seems to have a love affair with the man in the mirror without actually following through with any promises."

Burnett cited a CNN/ORC International poll showing roughly half (49%) of Republicans and Republican-leaning independents saying they support the tea party movement. Fifty-one percent said they have no feelings one way or the other about the movement, or they oppose it.

Priebus cited Democrats’ experience in the 2008 election as an example of a split party that emerged victorious.

“I think if you look at Barack Obama and Hillary Clinton, and you go back four years ago, you had two people that fought each other all the way through the end of June,” Priebus said. “And guess what, it was pretty good for the Democratic party.”

Priebus said the 2012 presidential campaign will end up being expensive, blaming Obama for hiking up the price of the election by aggressively campaigning.

“The fact is, it's going to be expensive,” Priebus said. “We've got a president who's in love with campaigning.”