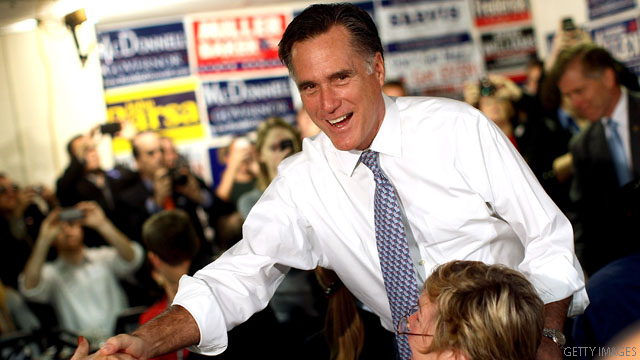 A three-page DNC memo released to the media Friday said Romney is losing support due to his shifting and "out-of-touch" policy positions that would disproportionately harm the middle class.

"To say that Mitt Romney flips around on his positions more than a weathervane would be an insult to weathervanes," DNC Communications Director Brad Woodhouse wrote. "As Mitt Romney clings to his status as a frontrunner of the GOP presidential field, even Republicans seem to be nervous about who Mitt Romney really is and what he actually believes."

To prove his point Woodhouse contrasted Romney's economic and foreign policy proposals with those of President Barack Obama.

While Romney would let the foreclosure crisis run its course, allowing homeowners to "hit rock bottom," the president is proposing executive actions to make it easier for property owners to hold onto their homes, Woodhouse said.

The former Massachusetts governor told the Las Vegas Review-Journal last week that the housing crisis needs to bottom out before it can recover.

Another point of contention for Woodhouse was that Romney accused the president of withdrawing troops from Iraq as part of a "political calculation."

"This is an astonishing charge coming from Mitt Romney who has taken multiple positions on virtually every major foreign policy issue that the U.S. has confronted over the past several years and changes his tune day in and day out for sheer political gain," Woodhouse wrote.

But the Romney campaign said the targeted attacks are a sign of Romney's strength within the GOP field.

"Democrats realize that Mitt Romney is the only Republican who can defeat President Obama in 2012. They are desperate to hold onto power, and will do and say anything to distract from President Obama's abysmal economic record," Romney campaign spokesman Ryan Williams told CNN. "Americans won't be fooled by false and negative attacks – they know that President Obama has failed, and they are eager to replace him with a new leader who can get our country back on track."