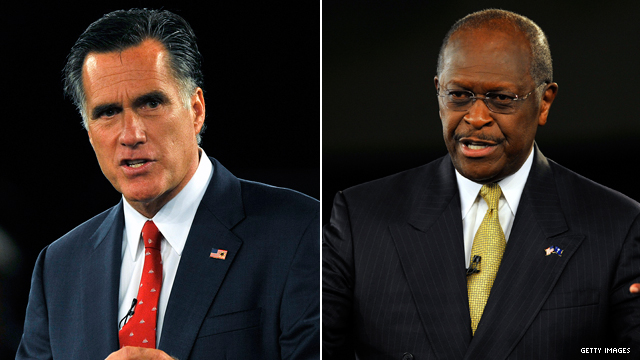 Released late Saturday, the Des Moines Register's Iowa poll of likely Republican caucus-goers shows the conservative Georgia businessman at 23%, with the former Massachusetts governor at 22%. The difference is well within the survey's margin of error.

The numbers somewhat mirror the most recent CNN/Time/ORC Poll for Iowa.

The results seem to turn conventional political wisdom on its head.

Both Cain and Romney are leading despite spending scant time in Iowa. Cain has campaigned in Iowa only once since late summer. And Romney has spent only six days in the Hawkeye state this entire political cycle, according to the Des Moines Register's candidate tracker.

In contrast, Santorum, Paul and Gingrich have each barnstormed across the state – but remain saddled with low numbers in various polls. That raises questions of whether or not their messages are resonating with voters.

The congresswoman won the first big contest of the presidential cycle – Iowa's Ames Straw Poll – in August. Since then, her poll numbers have plummeted. Between the June survey and the current one, Bachmann's support has fallen 14 percentage points.

The Des Moines Register conducted its poll October 23 to 26. It surveyed 400 likely GOP caucus-goers. The margin of error is plus or minus 4.9%.