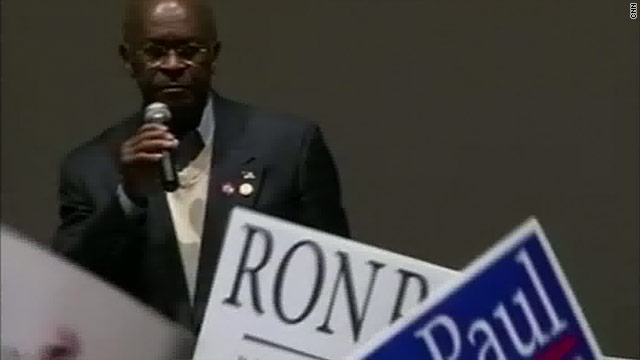 Cain tells Paul supporters to 'be respectful' during speech

(CNN) –- Herman Cain spoke to a rowdy crowd of supporters in Alabama Saturday – they just weren’t all his.

Trying to make a point about foreign policy, Cain was loudly interrupted by spectators in the crowd waving Ron Paul signs and yelling, “That is absurd.”

The former Godfather’s Pizza executive stopped making his policy point to tell the group to settle down.

“With all due respect, I'm going to give this speech today, thank you very much,” Cain told the crowd.

Moments later, Cain was interrupted again while making a point about the Federal Reserve. One of Rep. Ron Paul’s signature positions is eliminating that organization.

“The Federal Reserve, I do not believe that we need to end the Fed, we can fix the Fed, that's all I want to say about that, alright,” Cain said to a showering of boos.

Cain again stopped his stump speech to ask the crowd to quiet down.

“Are you all going to let me do my speech or not?” Cain asked. “All I'm asking for is the respect for me to give my comments and my speech, that's all I'm asking. Just be respectful, that's all, thank you very much.”

Cain is in the final day of a swing through Alabama, a choice seen by some as puzzling, given Alabama’s place on the primary calendar.

Nearly two dozen states are scheduled to hold their contests before the Yellowhammer State's March 13 primary, according to the Federal Election Commission.