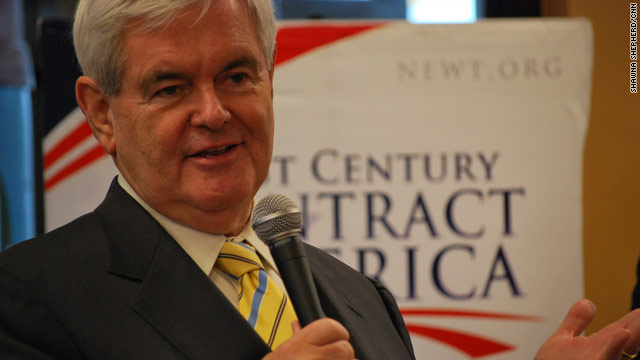 Greenville, South Carolina (CNN) -– Claiming he and Herman Cain are from “two different worlds,” Newt Gingrich questioned Cain’s readiness to lead by emphasizing his own Washington experience to a South Carolina voter torn between supporting the two presidential candidates.

The former House Speaker told a jam-packed Chick-fil-A here Friday that he considers the businessman, a fellow Georgia resident, a good friend. “But I think in terms of practical, deep understanding of America that we just operate in two different worlds, we’ve had two different career tracks,” said Gingrich.

“The biggest difference I think is pretty straightforward: trying to fundamentally change America is really hard,” he said. “Talking about it is really easy.”

The man who asked the question appeared to be skeptical of Gingrich’s background, referring to him as an “experienced politician, and that’s what’s gotten us in the fix we’re in right now.”

Gingrich, however, argues his government experience is what makes him more qualified than Cain to be the next president of the United States.

Gingrich challenged the Chick-fil-A audience, many armed with his Contract with America pamphlets, to think about the following scenario when considering whether to support him or Cain.

“If you think to yourself it’s October of next year and President Obama has a billion-dollar war chest with which to try to destroy his opponent with advertisements and you’re down to the debates, who do you want standing on that platform opposite Obama explaining America so the American people decide that’s the future they want?”

Despite his poll numbers hovering in the single digits in the early primary states, Gingrich is confident he’ll come in the top two in Iowa and New Hampshire, and win South Carolina where he’s spending the next two days campaigning

“I think people are more worried about this country today than any time in my lifetime. Now, I actually think that’s the only time I make sense as a candidate because I’m a really serious person,” said Gingrich. “I mean, you’re not going to hire me to cheerlead at your birthday party but you might hire me to save the neighborhood.”