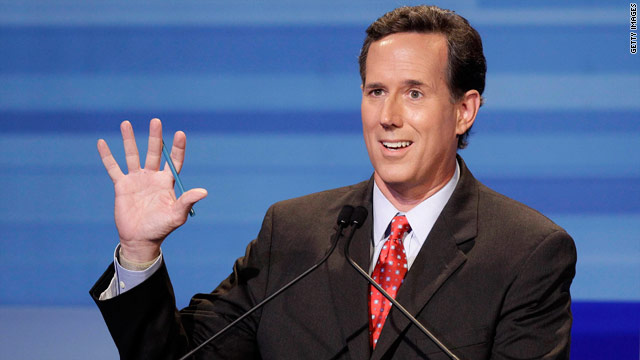 The decision to support Santorum and Cain came Saturday at the group’s Presidential Preference Convention in Des Moines, Iowa. The NFRA bills itself as “the nation’s oldest and largest Republican volunteer organization.” Its delegates refer to it as “the Republican wing of the Republican Party.”

Of the 94 NFRA delegate votes in the final endorsement tally, Santorum won 69, Cain 25. Attendees to the convention represented 26 of the 37 states where the NFRA operates.

Over six rounds of voting, members praised their picks, lobbied for support and – at times – argued forcefully.

The final decision went down to the wire. Over successive rounds of voting, candidates were dropped from consideration one by one.

Mitt Romney, Jon Huntsman and Gary Johnson fared the worst. In the first round, they easily became the first political casualties, receiving no voices of support. The three men were dropped from consideration.

Next to go: Michele Bachmann. The Minnesota congresswoman received only two delegate votes in the first round – and none in the second.

On a motion to drop her name from consideration, one person urged the crowd, “Michele may be the dark horse. Let’s leave her.” Another yelled out: “Michele has voted consistently in the Congress for conservative causes.”

The scant pleadings were not enough. In the face of such little support, Bachmann’s name was also dropped from consideration.

That left only Cain, Santorum and Texas Gov. Rick Perry standing in the fourth round – with 37, 38 and 20 votes, respectively. Racked with indecision and facing a possible deadlock, there were signs of an intra-group family feud.

Someone motioned that Perry also be removed from contention – a proposal staunchly opposed by the Texas governor’s supporters.

“The Perry people have no right to think he’s going to get endorsed,” one man said.

“If you came here to endorse Perry, at this point you should be thinking about Herman Cain or Rick Santorum,” yelled another man.

If Perry is dropped from the ballot, threatened former Ohio secretary of state and treasurer Ken Blackwell, “I will move that we not endorse.”

The Perry entreaties were ignored. Delegates dropped Perry from consideration and headed to a fifth round.

That vote margin did not meet the two-thirds majority required by NFRA rules.

After another passionate round of pleading, caucusing, then voting, many of the Perry supporters threw their support behind Santorum, helping him to emerge as the winner.