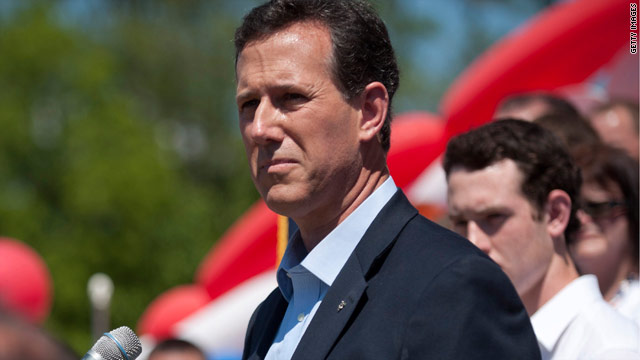 Des Moines, Iowa (CNN) - Rick Santorum told a crowd of Republicans Saturday he will make no apologies for speaking out against abortion, defending traditional marriage, and for stressing his positions on other social issues.

Then, the GOP presidential candidate coined a new phrase for a political tactic that, he explained, is used to tar and feather social conservatives.

"If you look at the debates, every single moral, cultural question has come to me first," Santorum said at the National Federation of Republican Assemblies in Des Moines, Iowa.

"Well as far as I'm concerned, bring it on...I am not ashamed for standing up for life, family and faith which are the foundation of our society," Santorum added.

In the 2008 GOP primary, former Arkansas Gov. Huckabee was seen by many as the most socially conservative candidate. Huckabee won the 2008 Iowa Republican Caucuses.

The former Pennsylvania senator's emphasis on his core social values is sure to appeal to a group that could help his campaign. Santorum's presidential bid is currently beset with at least a trio of political misfortunes: low name ID, poll numbers and fundraising totals.

But some solid debate performances, along with the most visits to Iowa of any GOP candidate this cycle, could help Santorum's standing. He has vowed to visit all 99 counties in the state, something he'll accomplish by the end of next week, he told the audience.

"One of the things I hear from people is, 'Oh Santorum, he's a good guy. He's a solid conservative. He's on my list. But you know, he can't win,'" Santorum said. "If you look at all the people in this race, look at the guy who's actually won. Look at the person who's actually been in a state that's a swing state that's going to determine this election."

Santorum won two terms to represent Pennsylvania in the Senate.

Another strategy that could improve Santorum's standing and visibility: continued criticism of the Republican frontrunners.

To that end, Santorum once again took aim at Mitt Romney.