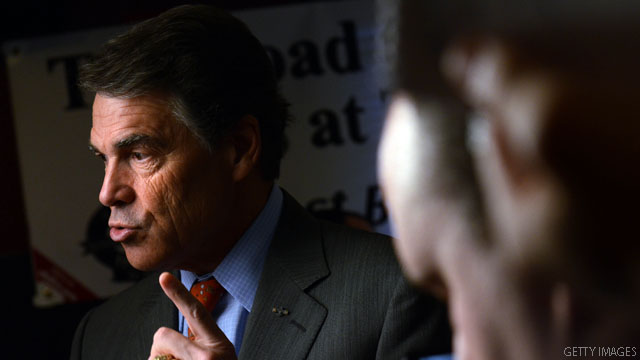 (CNN) - Texas Gov. Rick Perry still doesn't like debates, even though he has backed off from an earlier threat to drop out of upcoming showdowns with other Republican presidential candidates.

"I readily admit, I'm not the best debater in the world," Perry said on "Fox News Sunday." "With as many debates as we've got coming up, I may be a pretty good debater when it's all said and done."

Calling the debate schedule excessive due to the "incredible amount of time and preparation and what have you," Perry also questioned the value of oratory skills in the White House.

"We've got a great debater, a smooth politician in the White House right now, and that's not working out very well," he said of President Barack Obama.

Perry came under criticism last week, after his campaign suggested he might drop out of future debates following shaky performances in recent weeks that contributed to his sinking poll numbers. However, his campaign announced Saturday that he would attend four scheduled debates next month, including two co-sponsored by CNN.

In Sunday's interview, Perry focused his criticism on Obama and former Massachusetts Gov. Mitt Romney, a top competitor for the Republican presidential nomination.

On Obama, Perry said a "wavering" U.S. foreign policy involving the wars in Iraq and Afghanistan was putting American soldiers in jeopardy. In particular, he cited the forced resignation of Gen. Stanley McChrystal as U.S. commander in Afghanistan over a magazine article in which McChrystal and other officers were characterized as disrespectful of Obama, as well as the president's announced timetable for ending the two conflicts.

"He's lost his standing of being a commander-in-chief who has any idea of what is going on in those theaters," Perry said. "He's making mistakes that are putting our kids that are in the theater and I think future issues dealing with - whether it's in the Middle East or whether it's in the South China Sea with our allies - putting all of that in jeopardy because of this … aimless approach to foreign policy which he has."

On another issue, Perry admitted to changing his position on federal help for the energy industry after writing a 2008 letter seeking government backing for a nuclear power plant in Texas. Now, Perry said, he opposes any such federal aid like the kind he sought in the letter three years ago.

Despite such a shift, Perry reiterated his claim that he is a "consistent conservative" compared to former Massachusetts Gov. Mitt Romney, the steady frontrunner in the Republican race so far.

Romney, he said, has moved to the right politically on issues such as gun control and abortion to try to appeal to conservatives.

"We are very, very different from the standpoint of consistency on those issues I've just mentioned," Perry said.