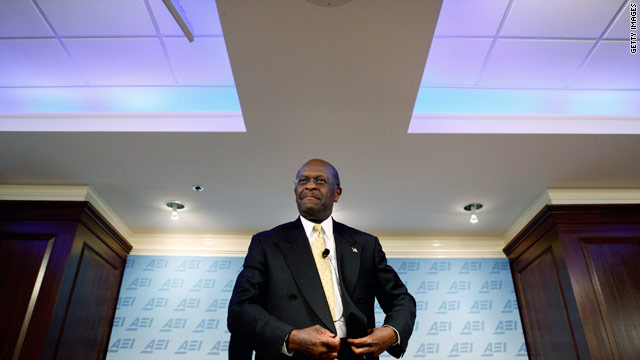 Cain: My tax plan is better

Washington (CNN) - Despite the media swarm focused on the sexual harassment allegations surrounding Herman Cain, the presidential candidate aimed to defend his 9-9-9 tax plan and slinging a few arrows at his competitors during a fiscal policy discussion in Washington, D.C Monday.

Speaking at the American Enterprise Institute, Cain said his Republican opponents were "scrambling to come up with something" better than his proposal.

His comments come nearly a week after Texas Gov. Rick Perry introduced a plan that would give taxpayers a 20% flat tax rate option. Calling Perry's plan the "flat tax light" plan, Cain argued it keeps many of the present-day tax provisions and doesn't differ strongly enough from the current system.

The former Godfather's Pizza executive jumped to front-runner status over the last month while pushing his tax plan, which proposes a 9% rate on corporate taxes, a 9% rate on income taxes and a new national 9% tax rate.

After taking heat for his plan at a recent CNN debate in Las Vegas, Cain said other candidates' plans simply "pivot off the current tax code" rather than scraping it entirely and starting over with new ideas.

In an apparent knock against opponent Mitt Romney, who introduced a lengthy economic plan in September, Cain said '9-9-9' offers "individual solutions to problems" and not "a 59 point plan that covers a whole lot of stuff that's not even related."

When asked if Cain thinks he can sustain his campaign's momentum to win the GOP nomination, Cain said it's up to the American people, not the Republican Party.

The packed room was buzzing with higher-than-normal media attention, as the event was Cain's first public appearance since news broke Sunday night of alleged sexual harassment cases against Cain when he led the National Restaurant Association.

The moderator asked that audience questions be related to fiscal policy only, saying Cain will make more appearances later in the day and can answer questions then.

"I will take all of the arrows later," Cain said when one person posted a question about the allegations.

Heating up between Romney, Obama camps