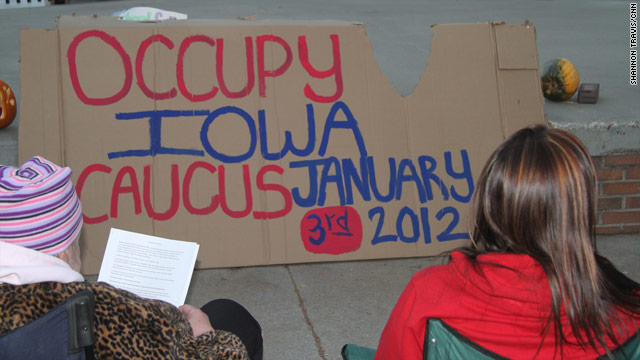 Des Moines, Iowa (CNN) – Occupy Wall Street activists plan to amass in Iowa one week before the Iowa caucuses - up to the day they're held on Jan. 3, CNN has learned.

The plan has been dubbed the "First in the Nation Caucus Occupation" - a play on words for the first-in-the-nation presidential contest. The idea is to have activists from across the nation, and possibly beyond, descend on Iowa.

The plan: "people coming to Iowa, occupying every presidential (candidate's) office, shutting them down until they start talking real turkey about what's going on in this country, where the 99% of the people who are not benefiting, at the expense of the 1% who are getting away with murder," said Frank Cordaro, one of the organizers.

The plan is to target offices for Republican candidates and President Barack Obama's campaign offices in the state.

On Monday evening, a group of Occupy Des Moines activists - who crafted the proposal - presented it to the larger group, seeking an endorsement.

The larger group of 50 to 60 Occupy Des Moines activists backed the idea. Following that, an invitation went out to Occupy Wall Street groups nationwide and beyond to come to Iowa. Thus far, organizers say, they've eyed the dates of December 27 through January 3.

If the protests occur, it appears they would be unprecedented for the Iowa caucus season. They could also spark clashes between Occupy Wall Street activists and scores of conservatives.

On Oct. 22 roughly two dozen Occupy Des Moines activists protested outside a gathering of about 1,000 conservatives attending the Iowa Faith and Freedom coalition in Des Moines.

After being ordered from the front of the venue, activists heckled attendees: "Is this the freedom you preach?"

Presidential candidates Michele Bachmann, Herman Cain, Newt Gingrich, Ron Paul, Rick Perry and Rick Santorum attended the event, though it's unclear whether any came in contact with the protesters.

Asked whether protesters intend to disrupt the caucuses and whether their "occupation" might turn violent, Cordaro said:

"Disrupt does not mean violent. We're not going to destroy any property. We're not going to hurt anybody. We're just going to, with our bodies, occupy these offices or shut them down until they actually start talking about the real issues that are facing the 99% of the people who are losers in this country."

"We're not going to prevent anybody from voting. We're not against the actual electoral process. We're against the people who own it right now. And we're trying to reclaim it. We're not trying to destroy it," he added.

Said another creator of the idea, Jessica Reznicek: "Through the occupation of these political campaign headquarters, and actions, we intend to make our voices more known."

The Iowa Republican Party did not respond to requests for comment about the protest plan. The Iowa Democratic Party issued a statement saying they "understand" the frustrations of the protesters.

"That's why we're working hard to make sure President Obama is reelected," party Chairwoman Sue Dvorsky said in a statement. "While President Obama is working to strengthen middle class, make sure millionaires and billionaires pay their fair share and reign in Wall Street, Republicans want to let Wall Street write their own rules and return to the same failed economic policies that got us into this mess."

Drew Ivers, a member of the Iowa GOP's Central Committee, was critical of any Occupy Wall Street-type protests.

"They will be engaged in a fruitless effort, because all they will do is create a lot of overtime hours for the Des Moines Police Department, who will make sure they are not obstructing any activity in any of those offices," Ivers said. "So I think their plan is futile."

"I think it's poor judgment on their part to express their frustration of the system," he added. "They should be shutting down, demonstrating outside the halls of the U.S. Capitol, and maybe the president himself."

Ivers also defended his party's presidential hopefuls as "attempting to change the economic plight, not add to it."

"I sympathize with (the Occupy Wall Street) frustration. But I disagree with their methods."