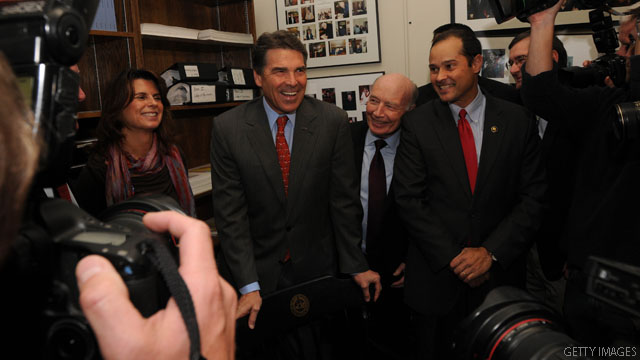 "If you're looking for a slick politician or a guy with great teleprompter skills, we already have that, and he's destroying our economy. I'm a doer, not a talker," says the Texas governor and Republican presidential candidate, smiling into the camera. "In Texas we created 40% of the new jobs in the entire country since June of 2009. And we cut a record $15 billion from our state budget. Now they say we can't do that in Washington. Well, they're wrong, and they need to go."

Perry's campaign confirms that the new spot is running statewide in Iowa, the first state to vote in the presidential caucus and primary calendar. But the campaign wouldn't give more details on how long the commercial will run, or how much money they are putting into the buy.

Last week Perry went up on Iowa television with the first paid ad of his bid for the GOP presidential nomination. In that commercial Perry pledges to create two and a half million jobs.

Soon after he launched his campaign for the White House in mid-August, Perry quickly surged in the national polls, jumping to the top of the field of candidates. But following some lackluster debate performances in September and early October, Perry faded in both national and state polling. A new Des Moines Register survey of likely Iowa GOP caucus goers indicates Perry at 7%, tied for fifth place, and far behind former Massachusetts Gov. Mitt Romney and businessman and former Godfather's Pizza CEO Herman Cain, the front-runners in the poll.

But Perry's campaign appears to have a deep war chest to pay for paid ads and get out the vote efforts in the early voting states. Perry had $15 million cash on hand as of October 1.