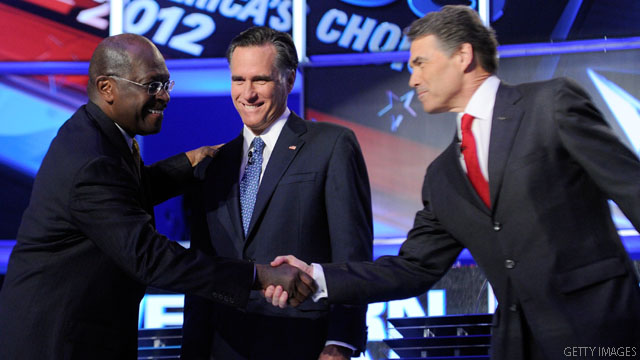 (CNN) – Herman Cain and Rick Perry lead the pack of Republican presidential candidates in Perry's home state of Texas, with the other GOP hopefuls trailing, according to a new poll released Monday.

The survey of 800 registered voters in the historically red state was taken between October 19 and October 26, before the POLITICO story that alleged Cain displayed inappropriate behavior to two female employees in the 1990s.

Cain and Romney have been atop recent national polls of Republican White House hopefuls, while Perry's approval figures have dropped since his late entry into the race.

Although Perry's approval ratings in the Lone Star State were lukewarm, they were more positive than Obama's. Thirty-nine percent of voters approved of Perry's performance as governor, while 44% disapproved. He fared better in the economic realm with 42% approval. Obama received a 33% approval rating and 57% disapproval figure. Twenty-eight percent approved of Obama's handling of the economy.