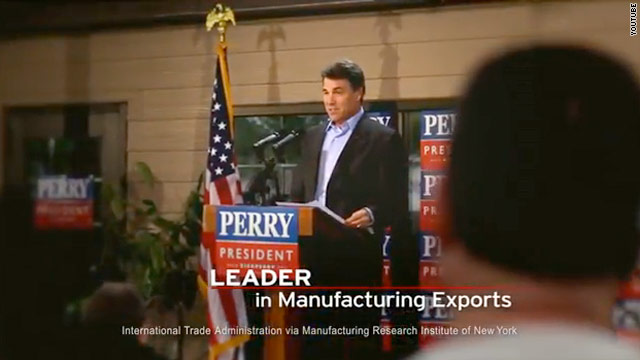 Columbia, South Carolina (CNN) – A pro-Rick Perry group is unleashing an ad campaign this week in Iowa and South Carolina on behalf of the Republican presidential candidate.

The Super PAC Make Us Great Again is spending a combined $382,000 over 10 days in the two early nominating states, where the Texas governor needs to gain traction to clinch the GOP nomination.

Beginning Tuesday in South Carolina, $180,000 will be spent to run ads in the Columbia and Greenville markets.

Ads will begin airing in Iowa on Wednesday on broadcast networks in Cedar Rapids, Des Moines and Omaha, as well as on cable stations in eight cities. The ad buy in Iowa costs $202,000.

The ads, posted on YouTube on Monday evening, describe the candidate as a "solid conservative" and are almost identical. About 11 seconds into the 30-second ad, voters in Iowa and South Carolina will be watching the same video, but will get a different message.

The spots come the day after the Perry campaign released their second round of ads in Iowa, the first-in-the-nation caucus state.

Make Us Great Again is not associated with the campaign. It was created over the summer by Texas political operatives and Perry donors, and plans to spend millions to help the Texas governor during this election cycle.