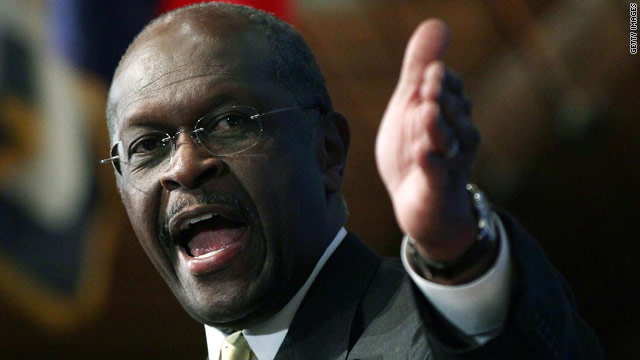 Washington (CNN) – Herman Cain's campaign says it raised more than $400,000 on Monday, a "clear vote of confidence from his supporters," after the story broke alleging he had been accused of sexual harassment while head of the National Restaurant Association.

"In the last 24 hours, the Friends of Herman Cain campaign has had the single best day of fundraising since the start of the campaign," Mark Block, Cain's chief of staff, said Tuesday night.

Block said Monday's donations, both online and by phone, doubled the normal daily average in Cain's campaign to become the Republican presidential nominee.

Meanwhile, a so-called Super PAC, or political action committee supporting Cain but independent of the campaign, on Tuesday sent an e-mail fundraising solicitation in light of the accusations, first reported by Politico and vehemently denied by the businessman. In the request, the group Americans for Herman Cain uses language sure to fire up the conservative base. "The left is trying to destroy Herman Cain, just like they did to Clarence Thomas. They are engaging in a 'high-tech' lynching by smearing his reputation and attacking his character."

Conservatives from Rush Limbaugh to Ann Coulter have used the reporting of the accusations as a way to attack both the media and liberals, although it is not known who leaked the information about the alleged incidents.

Cain told Fox News on Tuesday night that he is someone "Democrats, liberals do not want to get the nomination."

When asked if he thought being a strong black conservative contributed to the accusations coming up now, he said yes and added, "But we do not have any evidence to support it."

In its solicitation, the political action committee also said it believed race was a factor.

"Let's stand up against those who would like to take down any black man who stands up for conservative values."

With Cain leading the most recent Des Moines Register poll in Iowa, it is clear the Cain camp and its backers want to make sure these allegations don't dent his support. The political action committee, which said it has already seen a spike in donations but refused to give details, said it will use money raised to make 1 million phone calls to potential caucus attendees in the state.

Steve Grubbs, a veteran political organizer in Iowa who is the volunteer chairman for the Cain campaign in the state, said he was not sure what the reaction would be among Iowa Cain supporters when the story broke. But so far, he said he has not seen any dent. He said he signed up 40 precinct chairmen on Monday, a major jump from Friday.

"It certainly was an early indication our people are sticking with us," Grubbs said.

He said the attacks on the story by conservative leaders have been a boost. "That helps us as well in the field and on the ground," Grubbs said.

He also said so far Cain is getting support from conservatives in the state, although it is important for the candidate to get back to touting his economic message when he can.

While Cain has been criticized for not going recently to the key early voting states, such as Iowa, Grubbs said the campaign's infrastructure, which is key in such a caucus state, is being built. Four paid staffers are now on the payroll.

Cain is tentatively expected to make a visit to Iowa before the end of November.

"Yes we need him in Iowa," Grubbs said.

Voters there want to meet personally with the presidential candidates.

Grubbs said Cain's ability to quickly deal with the allegations this week in more professional settings, such as well-lit interviews rather than standing outside a factory, was helpful for him in Iowa as well as nationally because he was able to get his message out, despite those appearances being dominated by questions on the accusations.