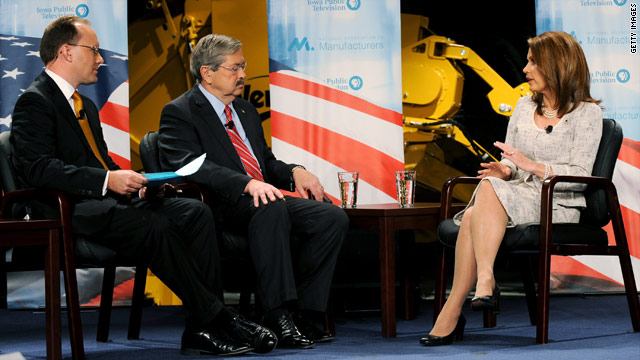 The candidates who spoke are the five trailing in polls in Iowa and nationally. The two Republican front-runners, Mitt Romney and Herman Cain, did not attend the event.

Each candidate took questions from Iowa's Republican Gov. Terry Branstad and Tom Hudson, co-anchor and managing editor of PBS' Nightly Business Report. Though the candidates spoke separately - for about 10 to 15 minutes - they coalesced around similar conservative economic themes: less government regulation, reduced corporate taxes and repealing "Obamacare" to save jobs.

First to speak, Perry covered a range of issues of concern to the manufacturing community, including how to help the U.S. become more energy independent.

The Texas governor reiterated his stance on the controversial proposal for the 1,700-mile Keystone oil pipeline that would carry oil from Canada into the southern United States. Critics fiercely oppose the project, believing it could taint underground water supplies

"When you look at the Canadian pipeline, that Keystone pipeline, that oil is going somewhere," Perry said. "It's either going to go west, to China, or it's going to go south, to the United States. There is no doubt, in my mind, where that energy resource needs to go."

The Iowa governor also covered jobs and taxes with Perry.

"One of the biggest impediments for jobs is the federal tax burden," Branstad said. "Would you support reducing the federal corporate income tax and eliminating the penalty for bringing profits back from overseas?

Perry responded by plugging his recently-revealed tax plan. Among its proposals: a plan to lower the corporate tax rate.

"Corporate ought to be 20%...get rid of all the loopholes," Perry said.

"Washington corporate lobbyists are going to hate me as president of the United States. I'm going to take a wrecking ball to that corporate tax code, frankly the personal tax code as well," Perry added.

"I've put together a plan that - I know Rick Perry was talking about 20% - but when it comes to manufacturers and processors, we zero out the corporate tax."

"We'd say there'd be no corporate tax for people who make things here in America."

It is also a favorite target for conservatives.

"We have a lot of small community banks out here, they were not part of the problem, they didn't make risky loans," the Iowa governor said. "Yet they are being hammered and over-regulated and additional taxes and burdens placed on them. How do you feel about that?"

"I would repeal Dodd-Frank," Santorum said.

Bachmann's first question concerned, what moderator Hudson said, are the 20 industries forecast to lose jobs at a fast pace, "19 of which are in manufacturing."

"How do you address this trend?" Hudson asked.

"We need the federal government to get off our backs when it comes to federal taxes. They're taxing us to death," Bachmann responded.

"You're making us un-competitive."

Bachmann even mentioned the recently deceased founder of Apple to make her point.

"Steve Jobs recently said this to President Obama. He said, 'You're killing us with regulations.'" Bachmann was apparently referencing a new Jobs biography that reportedly makes that claim.

Paul took the stage and reiterated his criticisms of international trade agreements, his plan to cut $1 trillion in government spending and his opposition to the Federal Reserve.

Branstad asked Paul: "Chairman Ben Bernanke is due to hold a news conference tomorrow. What would you like to hear from the chairman?"

Following Paul, Gingrich reiterated themes from his recently revealed "21st Century Contract with America," stressed the importance of research and development, and lectured Congress on passing legislation, such as on tax credits, whose impact is only felt short term.

And taking yet another of his frequent swipes at Barack Obama, Gingrich called the president, "a left-wing radical who believes in class warfare."