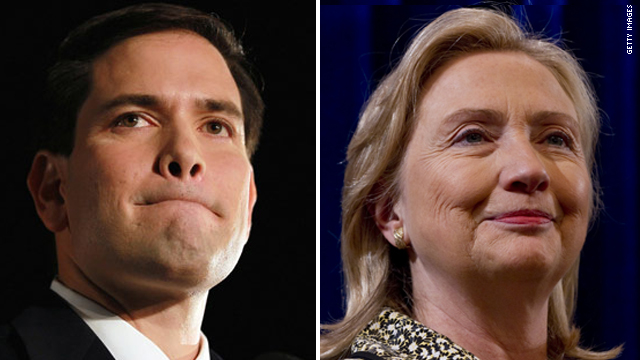 (CNN) - Mitt Romney and Herman Cain are tied at the top in the battle for Florida's Republican primary, according to a new poll. And a Suffolk University survey of Sunshine State voters also indicates that adding Sen. Marco Rubio of Florida to the GOP ticket would change the political landscape in the key battleground state.

According to the poll, 25% of registered Republicans in Florida say they support Romney, the former Massachusetts governor who's making his second bid for the White House, with 24% backing Cain, the businessman, former Godfather's Pizza CEO and radio talk show host. Romney's one point margin is well within the survey's sampling error.

The poll was conducted almost entirely before reports emerged of sexual harassment allegations against Cain.

A CNN/Time/ORC International Poll released last week indicated that three out of ten Republicans said they would back Romney, with Cain at 18%. Gingrich and Perry each at 9% support, with Paul at 6% and everyone else in the low single digits.

Florida is becoming a player in the battle for the GOP presidential nomination and will hold its primary on January 31, voting fourth in the primary and caucus calendar. Florida has a closed primary, allowing only registered Republicans to participate.

In hypothetical 2012 general election matchups, the poll indicates that President Barack Obama is deadlocked with Romney at 42%, with Obama holding a three point margin over Cain, 42 to 39%, which is within the sampling error. The president holds a 46 to 34% advantage over Perry and a 44 to 32% lead over Paul, and a 45 to 38% margin over Gingrich.

The poll also asks about Rubio, the Republican freshman senator from Florida. If Rubio was the GOP vice presidential nominee, the poll indicates the Republican ticket holds a 46 to 41% margin in the Sunshine state.

"Marco Rubio secures Florida which, along with Ohio, is one of the two most important swing states to win, said David Paleologos, director of the Political Research Center at Boston's Suffolk University. "He also adds potential strength in states like New Mexico, Texas, California, Arizona, and Nevada, which have high Hispanic populations."

Rubio has repeatedly said he has no interest in serving on the GOP ticket.

While the poll indicates that Obama struggles in Florida the low 40 percent range on job performance and possible 2012 head-to-head matchups with Romney and Cain, he rises to 50 percent in a hypothetical match up when Secretary of State Hillary Clinton is added to the Democratic ticket, as the running mate.

"Clinton has become the quantifiable lifeboat that could save a sinking Democratic ticket in 2012," adds Paleologos.

The Suffolk University poll was conducted October 26-30, with 800 Florida registered voters questioned by telephone. The survey's overall sampling error is plus or minus 3.5 percentage points.