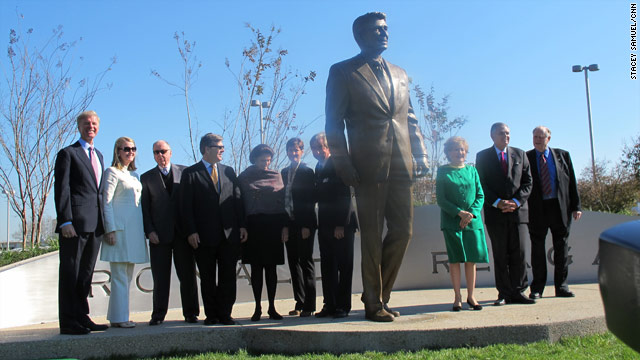 Washington (CNN) - This year, Ronald Reagan would have turned 100 years old. And, as part of many events celebrating his centennial, the airport that bears his name has now unveiled a statue of his likeness.

Travelers entering Terminal A of the Ronald Reagan Washington National Airport will now be greeted by the nine-foot tall bronze statue.

It took two years, and nearly a million dollars, to bring the 900 pound structure to fruition. It was with the help of the former Secretary of Transportation, Elizabeth Dole, who served under the president, that The Ronald Reagan Foundation was able to raise the necessary funds.

Behind the podium, Dole stood beside James Burnley -who was once her Deputy Secretary of Transportation before taking over the position- as they acknowledged their efforts to rebuild the system following the 1981 strike by the Professional Air Traffic Controllers Organization.

"It is a privilege to be able to unveil today a statue of Ronald Reagan, the man who blessed this endeavor, who signed the legislation, who was cheering on the effort all those years ago," said Dole.

It was the DOT's push to transfer control of the two Washington D.C. area airports from the federal government to regional transportation authorities, Dole and Burnley say, that allowed for the unveiling today.

"The argument that prevailed was that, these airports were going to look today like they looked in 1984 and '85 and '86, if we did not get them in the hands of a local regional authority," reflected Burnley.

But, the commemorations to the 40th president aren't limited to Washington alone. Three more statues of President Reagan, by sculptor Chas Fagan, are housed in the U.S. Capitol Rotunda, in Grosvenor Square in London, and at the Reagan Library in Simi Valley, California.

Fagan who majored in Soviet Studies at Yale University in the 1980's, says his affinity for Reagan began when he heard the president speak at the Reykjavik Summit in 1986. His only regret is that he never met the man whose image he has carved many times. But, he draws his motivation to continue doing so from a more personal place.

"The responsibility now is to introduce him to other people and tell the story," he says.