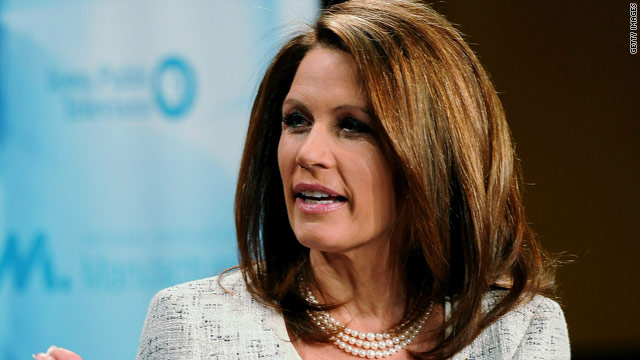 (CNN) - At a time when two Republican front-runners in the presidential race are taking heat over changing their political positions, Minnesota Rep. Michele Bachmann hailed her record as consistent on Wednesday.

"I have a core conviction. I don't deviate. I am consistent," Bachmann said in an interview with WHO Radio in Des Moines, Iowa. "There are no surprises with me."

Her radio interview echoed earlier comments she made Tuesday night at a campaign stop in Iowa, where–in an apparent knock against Herman Cain–she said the party needs a nominee with "no surprises."

"We have to have a candidate that we know that when we put them in office, we can trust them with their record, with what they have done and who they are," Bachmann said. "I have that record. I have stood strong on those issues."

The former Godfather's Pizza CEO is facing a firestorm over sexual harassment allegations made against him when he led the National Restaurant Association in the late 1990s.

On top of the accusations, both Cain and former Massachusetts Gov. Mitt Romney have been under fire for waffling in their answers on issues ranging from abortion rights to foreign policy.

Bachmann continued the "surprises" line on Wednesday, arguing that voters won't see any changes in her positions.

"I have always been pro-life. I've talked that talk, but I've walked that walk in my life," Bachmann said in the radio interview. "You won't have to worry if I'm changing my position"

Meanwhile, Bachmann has continued to drop in national polls. Despite winning the much-watched Ames Straw Poll in Iowa nearly three months ago, she now hovers in the mid-single digits.

According to a CNN/TIME/ORC International poll in late October, Bachmann took 6% of support among registered Republicans in Iowa.