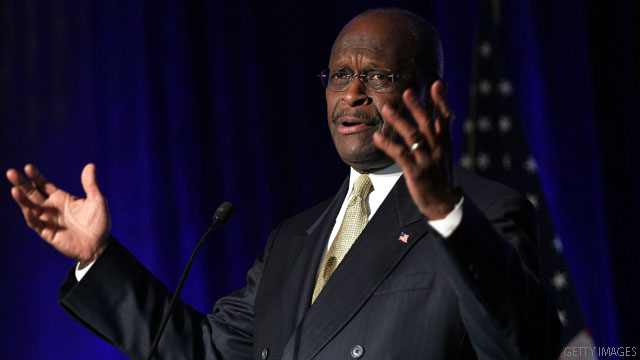 Cain: 'Factions' are out to get me

(CNN) – Herman Cain remained defiant against his critics Wednesday, armed with what he said is the voice of the American people and new national poll numbers.

The embattled Republican presidential candidate said his grassroots supporters have propelled his campaign from the beginning and will remain supportive, despite the controversy that exploded this week.

"There are factions that are trying to destroy me personally as well as this campaign," Cain said Wednesday morning before the Consumer Electronics Association. "But there is a force greater, there is a force at work here that is much greater than those that would try to destroy me and destroy this campaign and this journey to the White House and that force is called the voice of the people."

Cain, the former Godfather's Pizza CEO, has spent much of the week responding to a report that two women lodged sexual harassment charges against Cain when he led the National Restaurant Association in the late 1990s.

Team Cain said their fundraising has increased since the news broke, boasting an over $400,000 haul Monday.

During his speech in Virginia, Cain touted a new Quinnipiac University survey as evidence his campaign is strong.

"The American people, folks represent a sleeping giant that has awakened," Cain said. "They are tapped into this campaign."

The poll, released Wednesday, showed Cain ahead of rival Mitt Romney by seven percentage points nationally, 30% to 23%, a lead wider than the sampling error.

However, the survey was taken almost entirely before the POLITICO report of sexual harassment allegations arose Sunday night.