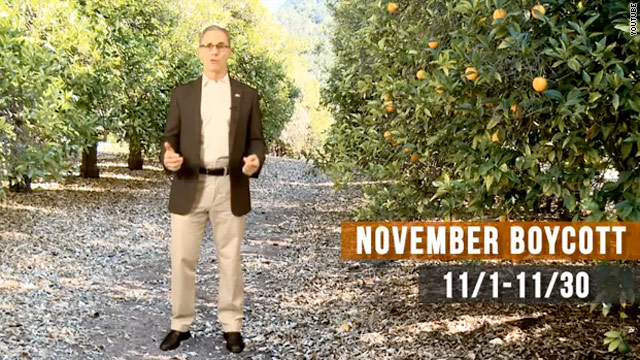 The candidate is asking people to join him in boycotting Florida orange juice, and suggests switching to grapefruit instead.

Karger's boycott is meant to pressure Florida to push back its primary into March. In violation of Republican National Committee rules, Florida moved its primary up to Jan. 28, which prompted other states to follow suit.

He objects to the accelerated primary schedule, which he said helps only the candidate leading in the polls.

"There's only one beneficiary of this: the front-runner," he said while campaigning in New Hampshire Wednesday, adding earlier voting disadvantaged lesser-known candidates. "We have less of a chance to meet the voters, tell our stories, raise money."

There is little evidence to suggest Karger's boycott is attracting a following, but that doesn't mean the gay rights activist isn't taking his chosen task seriously.

He has advice for protesters confused about whether their OJ is acceptable.

"You've got to read the label. Most are a mixture of Brazilian and Florida, so it's hard to tell," Karger said.

His campaign has released a web video, which features Karger standing in an orange grove.