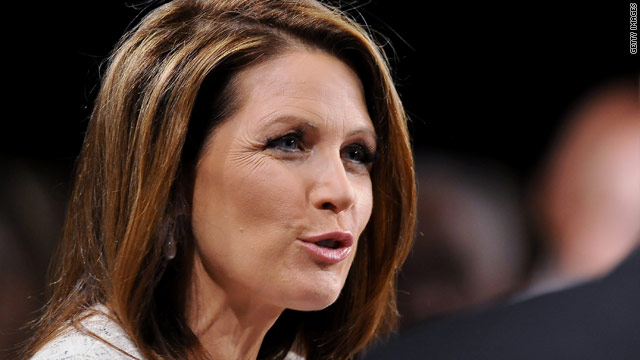 (CNN) – Minnesota Rep. Michele Bachmann is confident that when it comes to jobs, she would be a rainmaker as president.

“I have no doubt that we would create millions of jobs,” she said Friday of her prospective presidency, shortly before the October jobs report reflected a dip in unemployment.

The NBC interview took place before the official report that unemployment has decreased to 9% was released, but Bachmann made sure to lay blame for the economy’s shortfalls where she saw fit.

“House Speaker Nancy Pelosi said if we passed Obamacare we’d create four million jobs,” she said. “I talk to job creators all the time in Iowa, they aren’t hiring because of Obamacare, because of all the tax increases that are involved.”

And on the issue of taxes, the third term congresswoman who’s seeking the 2012 GOP nomination for president said it’s time that all Americans start paying up.

“I believe we have to broaden the base to include every American. It’s about time and it’s only fair.”

Facing down rumors of trouble within her campaign, Bachmann asserted that “we are working very hard and we’re very strong.” Five members of her team resigned in October, including the manager of her New Hampshire campaign, but Bachmann argued that staff turmoil is not on the minds of everyday people.

“Not one person has asked me about who we’re hiring or who our staff is,” she said. “What they say to me is, ‘Michele, I really like your plan.’”

Bachmann has been spending a lot of time in the first-in-the-nation caucus state where she won the critical Iowa Straw Poll in August, and where she hopes to finish strongly in the first presidential nominating contest on Jan.4.

“Mine is a pro-growth, pro-job plan, that’s what people want, that’s what they’re excited about here in Iowa,” she said.