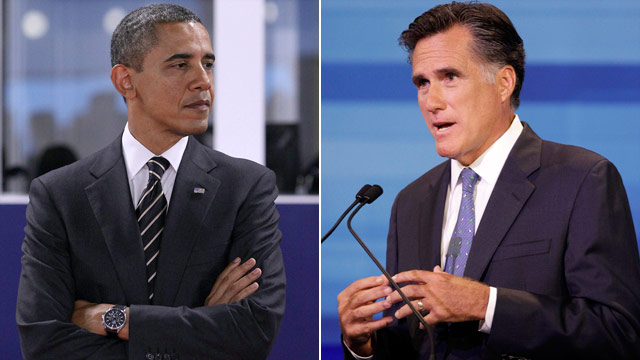 (CNN) – If the presidential election were held today, a new poll reveals that voters would be divided between incumbent President Barack Obama and current GOP frontrunner Mitt Romney.

According to a Gallup poll released Friday, Romney edges out former Godfather's Pizza CEO Herman Cain and Texas Gov. Rick Perry as the more competitive candidate in a hypothetical matchup with President Obama.

In 12 swing states including Colorado, Iowa, Michigan, New Mexico, North Carolina, Ohio, Pennsylvania, Virginia, Wisconsin, the first-in-the-nation primary state of New Hampshire, Florida, where the fourth presidential nominating contest is held, and Nevada, which will host the fifth contest when its caucus takes place on Feb. 4, Obama trails former Massachusetts Gov. Mitt Romney by one percentage point, well within the poll's margin of error. Swing state voters are split between the former governor making his second bid for the GOP presidential nomination and the incumbent president 47-46%.

Romney fared slightly better than Perry or Cain among voters both nationwide and in swing states.

Across the country, Obama holds a 48-46% margin over Cain, a margin that increases by one percentage point in swing states, where he takes 48% support to Cain's 45%. The survey was conducted before allegations of sexual harassment by Cain during his time at the National Restaurant Association emerged.

Among the three GOP contenders, the longest running governor of Texas is the least competitive when matched with President Obama. The biggest margin where the president is ahead is among swing states where he has an edge of five percentage points, still within the sampling error for the poll.

Forty-nine percent of voters across the country would choose Obama over Perry, who would receive 45% support if the general election were held today and Perry were the nominee. In swing states, 49 percent picked Obama and 44 percent chose Perry. The president's margin's over both Cain and Perry are also within the survey's sampling error.

The poll results show the president performing better than Gallup's hypothetical matchup of Obama against an unnamed Republican candidate in a presidential contest-in that measure the president has consistently polled behind the generic Republican.

And the GOP may benefit from an enthusiasm gap in next year's election-the survey reflects that more than half of Republican voters are extremely or very enthusiastic about voting compared with less than half of Democrats, both nationwide and among included swing states.

The Gallup poll was conducted by telephone from Oct. 20-27 among 1,334 registered voters in twelve selected states. It has a sampling error of plus or minus three percentage points.

Gallup's national survey was conducted among 1,169 registered voters during the same dates and has a sampling error of plus or minus four percentage points.