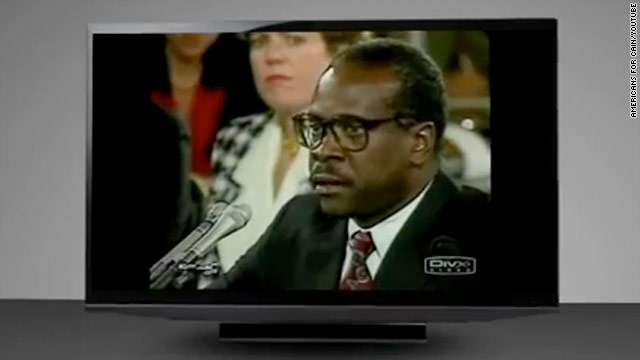 Washington (CNN) - An independent group dedicated to helping Herman Cain win the GOP presidential nomination is up with a web video that defends the Republican presidential candidate against allegations of sexual harassment.

The web video, by a super political action committee called the "9-9-9 Fund," includes clips of conservative hosts, including Rush Limbaugh, blaming the mainstream media for attacking a black conservative like Cain. The video uses television clips of liberal pundits attacking Cain as well as the famous clip of Supreme Court Justice Clarence Thomas calling his grilling during his confirmation hearings two decades ago "a high-tech lynching, and ends with the on-screen message, "Don't let the left do it again."

A spokesman for the superPAC tells CNN that a shorter version of the video will run as a paid commercial on Iowa TV starting next week and that his group will also blast out automated calls in Iowa and Nevada with the same message.

Iowa's January 3 caucuses kick off the primary and caucus calendar. Nevada is now scheduled to be the fifth state to weigh in on the battle for the nomination, holding its caucus on February 4.

The 9-9-9 Fund was launched last month to aid Cain's candidacy in the early voting states. The superPAC is run by Republican campaign veteran Jordan Gehrke.

Under Federal Election Commission rules, a "superPAC" can accept unlimited donations but must report its contributors and cannot coordinate with a candidate's campaign. Other GOP presidential candidates, including former Massachusetts Gov. Mitt Romney and Texas Gov. Rick Perry, as well as President Barack Obama, have superPACs established by former aides to help in their fundraising efforts.

Cain's sexual harassment controversy was ignited Sunday by a report on the political website Politico which alleged that two female employees at the National Restaurant Association accused Cain of inappropriate behavior during his tenure as head of the organization in the late 1990s. Cain calls the allegations fabricated and baseless.

Perry:  Our campaign didn't have anything to do with it