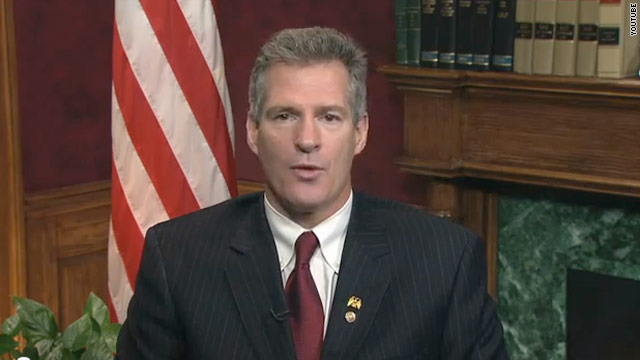 "Leader Reid has come to me a few times and asked me to consider bills on their merits, and I'm always willing to do so. And now I'm asking the same of my colleague, the majority leader," the Bay State junior senator said as this week's GOP speaker.

"Listen, I'm a still fairly new to the Senate, but I've been here long enough to have noticed something: One breakthrough has a way of leading to other breakthroughs. One show of good will has a way of spreading good will."

Brown encouraged the Senate majority leader to support a jobs bill Brown says he introduced in January that would "repeal the 3 percent withholding mandate" aimed at small businesses beginning in 2013.

"If this mandate is not repealed, then all levels of government will suddenly start withholding 3 percent of payments to contractors that provide any product or service to the government."

Brown urged Reid to vote for this "bipartisan opportunity," which "has the support of majorities in the House and the Senate, and also has been endorsed by the president."

"The decision pretty much rests with Majority Leader Harry Reid."

Vice President Joe Biden filled in for President Barack Obama this week, delivering the White House weekly address from the University of Pittsburgh. His message was less amicable.

When speaking of the White House jobs bill that died in the Senate, Biden attributed its failure to legislative maneuvering saying, "Although 51 senators voted for that jobs bill, our Republican colleagues in the Senate used a procedural requirement that requires it
to have 60 votes, so it failed."

Biden described the fate of the piecemeal strategy that was then used to pass the jobs bill, saying, "we've taken every important piece of the jobs bill and demanded that we have a separate vote."

"But our Republican colleagues in the Senate have voted unanimously to vote down each and every part so far."

The vice president explained Obama's decision to override these decisions.

"We can't wait for the Congress to start acting responsibly, and that's why the president has used his executive power to announce that hundreds of thousands of people will be able to refinance their homes from 6 percent interest rates to 4 percent, saving them an average of $2,000 a year."

Biden spoke of Obama's plans to reduce student loan costs for college graduates so that "no student will have to pay back more than 10 percent of their discretionary income toward their student debt" and spoke of cost-cutting "regulations regarding prescription drugs" as additional measures that will go into effect as a result of Obama's executive
powers.

"If the Republican Congress won't join us, we're going to continue to act on our own to make the changes that we can to bring relief to middle-class families and those aspiring to get in the middle class."