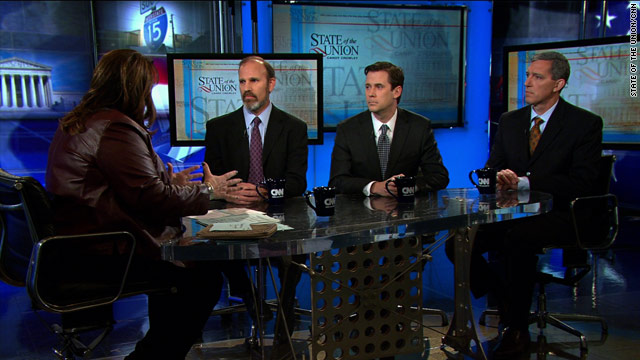 In an appearance on CNN’s “State of the Union,” lobbyists for the AARP, American Petroleum Institute and Air Transport Association cautioned that possible options including tax increases and spending cuts could harm their constituencies.

“Seniors, of course, are always willing to sacrifice for the country,” said David Certner of AARP, the nation’s main advocacy group for senior citizens.

However, he warned, “people outside Washington think very differently about protecting their benefits than people inside Washington,” especially involving programs such as Medicare and Social Security that are built on contributions from citizens over a lifetime.

Such entitlement programs need protection because “they do provide financial security,” Certner argued.

Sean Kennedy of the Air Transport Association warned against raising taxes on “an industry that is the third largest contributor” to economic output.

“The airline industry is one that has shed one-third of its workforce,” Kennedy noted, adding that “proposals circulating would impose another $36 billion in taxes.”

In defense of the possibility of increased airfares, Kennedy claimed that “airline prices have been much lower than inflation over the past 10 years” and argued that “air travel is still a relative bargain.”

Marty Durbin with the American Petroleum Institute acknowledged negative perceptions of the oil industry exist but said that “the facts aren’t out there.”

“There are no loopholes,” Durbin stated of calls to end subsidies and tax breaks for oil companies. “These are tax deductions that all industries are able to use.”

He compared oil companies to tech powerhouse Apple, saying the computer company “posts similar profits, yet their tax rate is lower,” with no objection from the public.

Each of the men made their own recommendations for the so-called “super committee” responsible for recommending $1.5 trillion in deficit reduction by November 23, with the penalty of deep spending cuts across the board - from defense to education budgets - if they fail to reach an agreement.

“Let’s talk the Medicare program and health care in general,” Certner said. He advised creating savings in the cost of health care by attacking “high drug costs” and improving coordination among health care providers who care for senior citizens.

Kennedy pledged that airlines are “going to live with whatever the ‘super committee’ gives us,” but also warned of an impact on “investments in aircraft, jobs, and in service.” Durbin, meanwhile, said oil companies “are willing to put all the tax provisions on the table,” but advised that “we are creating jobs.”

“Let’s not put anything in the way of doing that,” he said.