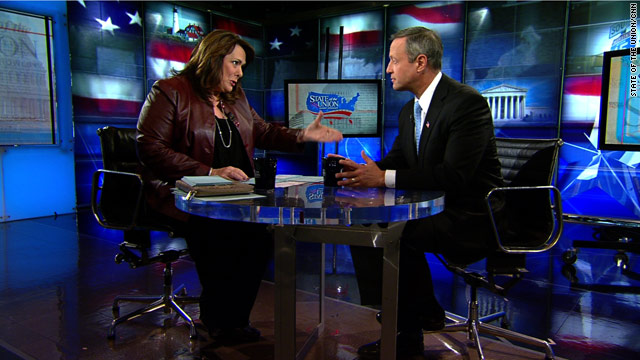 Washington (CNN)-Maryland Gov. Martin O’Malley on Sunday previewed the Democratic strategy for President Barack Obama’s re-election next year, saying that voters will choose the candidate “who’s earnest, who’s committed and who’s working hard on the things they care about.”

During an interview on CNN’s “State of the Union,” O’Malley conceded that “none of us is very happy with the state of the economy,” and the question facing voters is “whether the economy is becoming better?”

He cited “13 months of positive job growth” and “foreclosures down to the 2nd lowest level since November 2007” as evidence of an improving economy. The chairman of the Democratic Governors Association also zinged what he called “Tea Party Republicans” in Congress for stunting progress on jobs.

“You cannot ignore the fact (that) … people have taken an oath to block the path,” O’Malley said of GOP tactics.

The second-term governor criticized Republicans for focusing on politics more than policy, citing Senate Minority Leader Mitch McConnell’s statement last year that his top priority was “putting the president out of a job.”

O’Malley advocated what he called a balanced approach on economic and spending policies that eases the “gross inequalities that have been brought about by Bush administration policies.”

“I believe that’s where the president’s trying to move this conversation,” he said. “ … It’s all about balance.”

O’Malley declined to answer whether he’s contemplating a presidential bid of his own in 2016, saying: “I’m eyeing the 2012 race and I will do everything I can to help get President Obama re-elected.”