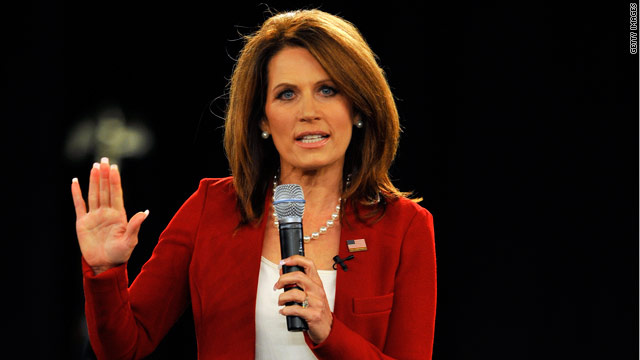 Washington (CNN) - Seeking to recover her once-impressive standing in the polls, Minnesota Rep. Michele Bachmann on Monday continued to position herself as the most conservative candidate in the Republican presidential race.

Speaking to about 50 Republicans and more than a dozen reporters at the socially conservative Family Research Council in Washington, Bachmann targeted unnamed GOP opponents in terms she usually reserves for Democrats.

"Unfortunately for too many Republicans, they also aspire to be frugal socialists," she said, apparently targeting GOP frontrunner Mitt Romney. "The reason President Obama and some Republicans can get behind socialized medicine is because they share the same core political philosophy about the purpose of government."

"We cannot preserve liberty for ourselves and our posterity if the choice in next November is between a frugal socialist and an out-of-control socialist," she added, the latter phrase a reference to Obama.

Bachmann called for a full repeal of Obama's health care reform law and claimed that Romney and Texas Gov. Rick Perry do not understand how to roll back the legislation.

Romney says he will grant waivers to states wanting to opt out of the law, while Perry says that he would overturn the law by executive order. Bachmann called both plans naive and said a "full scale repeal" of the law can only happen through Congressional action.

On a host of issues abortion, taxes, same-sex marriage, foreign aid and the federal judiciary Bachmann portrayed herself as "the candidate you can trust in office."

Bachmann is eager for a second look, especially in the must-win caucus state of Iowa, from the social conservatives and tea party activists who fled her campaign in September and moved to Perry, businessman Herman Cain or former House Speaker Newt Gingrich.

After winning the closely watched Ames Straw Poll in August, Bachmann sunk in the polls when Perry joined the race and captured the imagination of Republican primary voters. After Perry's similar collapse a month later, Cain moved into the void and soared to the top of the polls.

And with Cain now facing allegations of sexual harassment, Bachmann is trying to remind conservatives of her consistently conservative bona fides and full-throated opposition to all-things-Obama.

Bachmann is mired around 3% in national GOP polls, although her numbers are slightly higher in Iowa, where she is staking her campaign.

"This election season has been full of surprises," Bachmann said. "I can assure you there are no policy surprises with me. I am far from a perfect person, as all of you know too well, but I know who I am and I will never deviate from the principles that I have fought for all of my life."

She drew one of the sharpest lines in the sand on the matter of abortion, appearing to jab Romney and Cain, both of whom have faced questions about their pro-life principles.

Cain recently said that women and families should be able to choose abortion in cases of rape and incest, remarks that drew swift criticism from staunch abortion rights foes. Romney, meanwhile, said that abortion should be "safe and legal" when he ran against Ted Kennedy for the U.S. Senate in Massachusetts in 2004, but he has since moved to the right on the issue.

"I am both personally and publicly pro-life and our candidate has to do more than just check the box on the issues of life," Bachmann said. "They have to have a proven record on standing up for life. I believe it is the role of government to protect life from conception to death. I'll never be confused about that issue and you won't find YouTube clips with me advocating anything else."