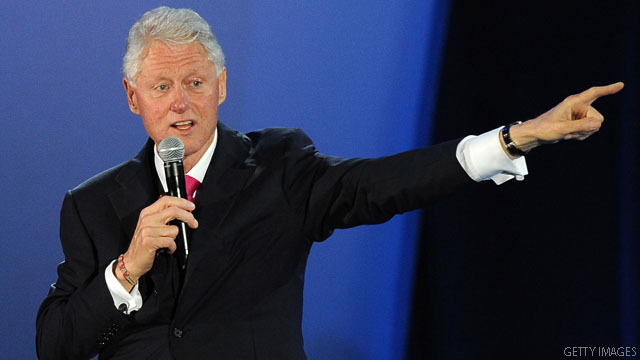 The former two-term Democratic president said it makes his "skin crawl" when Perry's Republican rivals attack him "for one of the best things he did."

"What would they like?" Clinton said during an interview with USA Today. "Would they like the kid to stand on a corner and sell dope or something?"

Perry has defended the law, which he signed in 2001, amid criticism from fellow GOP presidential contenders, particularly Mitt Romney.

The former Massachusetts governor has doled out tough words for Perry over the "liberal" policy while positioning himself to Perry's political right on the issue. On Monday, Romney adviser Eric Fehrnstrom tweeted a link to the USA Today story.

Perry was a late entry into the race and quickly rose to the top of the polls but has seen his national and statewide numbers dip after a string of lackluster debate performances. Minnesota Rep. Michele Bachmann and Georgia businessman Herman Cain made similar surges in the polls, which analysts and pollsters have interpreted as dissatisfaction with the GOP field. But Clinton warned Democrats against dismissing the opposing presidential field.

"It's always a mistake to underestimate your opponent," Clinton said. "People grow in these campaigns. How many times have you seen somebody get better in the course of an election? And it's also unpredictable what happens."