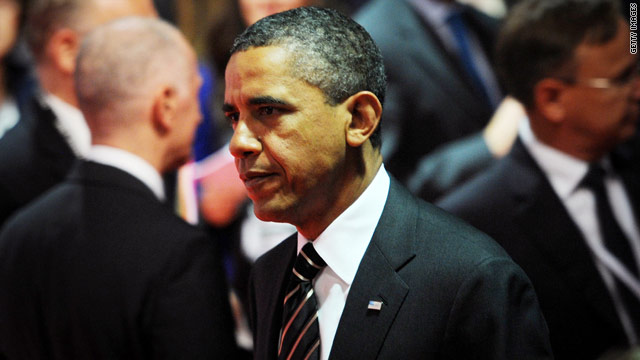 Washington (CNN) – Sunday began the one-year countdown to the 2012 presidential election when President Obama and a yet-to-be-determined GOP candidate will face off for the White House. A CNN Poll of Polls released Monday reveals the president's approval rating is still under 50%.

According to the CNN Poll of Polls, which is an average of the most recent national surveys, 45 percent of Americans approve of how the president is handling his job and 51% disapprove.

"Approval ratings are a useful measure of an incumbent's chances of re-election, but they are not meant to be a prediction of the vote in the next election," notes CNN Polling Director Keating Holland. "In Obama's case, for example, polls indicate that roughly one in three Americans who disapprove of him feel that way because he has not been liberal enough. Those people may not vote for Obama by staying at home on election day or voting for a third-party candidate, but they are probably not going to vote Republican."

The CNN Poll of Polls of the presidential approval rating one year out from the election is an average of three national polls released in November: Gallup daily tracking poll (November 3-5); ABC/Washington Post (October 31-November 3); and Reuters/Ipsos (October 31-Nov 3). The Poll of Polls does not have a sampling error.

The president's approval rating appears to be a reflection of the slow-to-recover economy and repeated standoffs with Congress, including the Republican-led House of Representatives, have hurt the Obama presidency.

Unemployment numbers have remained above the 8% figure projected by the White House during the push for a first economic stimulus, though the October 2011 jobs report reflected that unemployment has ticked down to 9%.

Although Obama can add the capture and death of Osama bin Laden, strikes on significant al Qaeda leaders, and troop withdrawals from Iraq to his national security resume, a stymied economy and threats of a double-dip recession remain on voters' minds.

The president hit the road over the past two months to sell his American Jobs Act to the public, a measure designed to boost infrastructure and promote job growth. The bill failed to pass in the U.S. Senate has since been broken into pieces in an attempt to revive measures of the president's proposal. Obama has railed against a do-nothing Congress while his opponents balk at the bill they describe as a second stimulus.