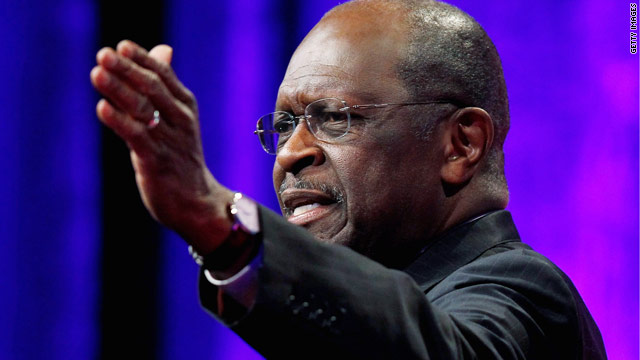 Cain on new accuser: I don't remember her

(CNN) – Republican presidential front-runner Herman Cain denied new accusations from a woman who publicly alleged Monday that Cain had sexually groped her in 1997.

"I don't even remember her. I reject all of those charges," Cain told ABC News. "How can I defend charges when I don't remember this person by name?"

Sharon Bialek and her attorney, Gloria Allred, held a news conference on Monday, in which they claimed Cain made unwanted sexual advances when he led the National Restaurant Association in the late 1990s.

She said the incidents occurred when she visited Cain about a job opportunity in Washington in 1997.

Bialek said when she objected to his behavior at the time, Cain asked, "You want a job, right?"

She is one of four women reported to claim they were harassed by Cain, and she is the only one to openly speak about the charges.

On Tuesday, CNN confirmed the identity of the first accuser as Karen Kraushaar, director of communications at a bureau within the Treasury Department who worked at the restaurant association from 1998 to 1999.

In numerous media appearances and campaign events, Cain has vehemently denied all accusations.

On Tuesday, he strongly pushed back against the new charges, saying he watched the press conference and had no memory of her.

"Throughout my career I have had nothing but the utmost respect for any and all women, as well as those that have worked under my leadership and all of the different companies that I have worked," Cain said. "I can categorically say I have never acted inappropriately with anyone, period."

After Bialek's news conference Monday, the Cain campaign released an email to supporters with details on Bialek, including her financial problems and her involvement in numerous lawsuits as a defendant.

On Tuesday Cain continued his line of attack on the media for pushing the story and pleaded that his family be left out of the coverage.

"Take all the attacks at me you want. I'm running for president. My family is not running. Leave my family out of these things," Cain said.

He added that his wife of 43 years also watched the conference Monday, but she felt the woman was lying and supported him "200%."

A number of presidential candidates responded to the new accusations on Tuesday during a series of interviews with ABC News. Many of them said the claims were a distraction from discussing the nation's problems.

Texas Gov. Rick Perry said: "I'm giving you my opinion: I don't have an interest in getting off of my message on how we create jobs in this country. A lot of allegations and 'he saids, she saids,' "

Meanwhile, Minnesota Rep. Michele Bachmann repeated a line she's used for days, saying she won't comment on the allegations but insisted voters won't get any "surprises" from her.

"I have absolutely nothing to contribute to that discussion," Bachmann said. "But what my comments were is that when you look at Michele Bachmann, when you look at me, there will be no policy surprises whatsoever coming out of me."

"They're going to have to be addressed seriously. I don't have any counsel for Herman Cain, for his campaign. They'll have to take their own counsel on this, but anytime there's an accuser that comes forward with charges of this nature, you recognize this is a very serious matter and it should be taken seriously," Romney said.

Former Pennsylvania Sen. Rick Santorum described the charges as "troubling" and said Cain, as a presidential candidate, will have to answer to anything lobbed his direction.

"All the other candidates are going to be held accountable for their positions and what they've done in their life," Santorum said.

Former House Speaker Newt Gingrich also weighed in, saying the game has changed now that a woman is speaking openly about the charges. Gingrich argued that Cain has an obligation to respond.

"He has to explain what happened, he has to do so in a way that's convincing. And I think that's unavoidable. And I think that he both owes her that, but he also owes the American people that, and I think, I hope he can do it well," Gingrich said.