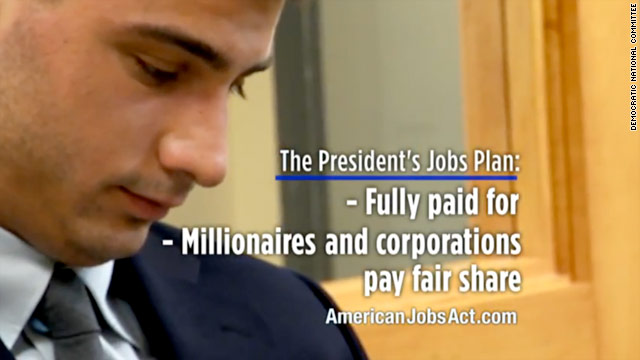 (CNN) - Democrats pushing for passage of President Barack Obama's jobs plan are using a new paid television advertisement to highlight the bill's efforts to put American veterans back to work.

Timed to precede the Senate vote on a bill which would provide help for unemployed veterans, the ad features Steve Gallucci, an unemployed Iraq war veteran. Cameras follow Gallucci as he looks for work.

"I served my country and can't find a job," Gallucci says. "I just got married. I just want to earn a living. Start my family. Get the white picket fence. This jobs plan definitely is going to do that."

The ad, which was paid for the Democratic National Committee, will air in Albuquerque, New Mexico, Raleigh-Durham and Greenville, North Carolina, and Dayton, Ohio. The 30-second spot will run on network and cable outlets, including CNN.

A DNC release heralding the ad listed proposals included in the American Jobs Act, which include tax credits for businesses that hire veterans and expanding job searching tools for men and women transitioning from the armed services into the civilian workforce. A bill that would provide help for veterans and repeal a 3% withholding from federal contractors passed on a procedural vote on Monday and is expected to be taken up by the full Senate this week.

The ad also emphasizes how Obama plans to pay for the new provisions, a key point for members of Congress concerned with increasing the federal deficit.

"The president's jobs plan gives tax credits for hiring veterans, and it's paid for by asking millionaires and corporations to pay their fair share," the narrator says.