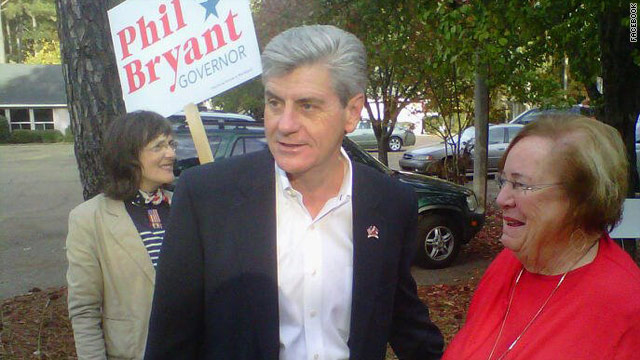 He will fill the seat left open by Republican Gov. Haley Barbour, who could not run again after serving two terms.

Bryant, 56, was considered the favorite over his Democratic opponent, Hattiesburg Mayor Johnny DuPree, who would have been the state's first black governor had he won.

DuPree, elected the first black mayor of Hattiesburg in 2001, was known for his platform on education, having first served on a public school board before moving into the mayor's office.

DuPree was was expected to spark a stronger-than-usual voter turnout among the African-American community.

"We live in a place called America that allows things like this to happen that have never happened before," DuPree told CNN anchor Don Lemon in an interview that aired before Election Day. "Isn't that awesome?"

But Bryant carried higher name recognition and boasted more experience in government. Before being elected lieutenant governor in 2007, he was state auditor, a legislator and a law enforcement officer.

The Republican also significantly out-raised DuPree. He received about $4.3 million in contributions this year, whereas DuPree took in about $1.1 million, according to The Clarion-Ledger newspaper.

Both candidates supported the initiative on the ballot that would define "life" as beginning at the moment of conception, which CNN projects will fail. The law would have made all abortions illegal, including those caused by rape, incest or posing a threat to the mother's life.