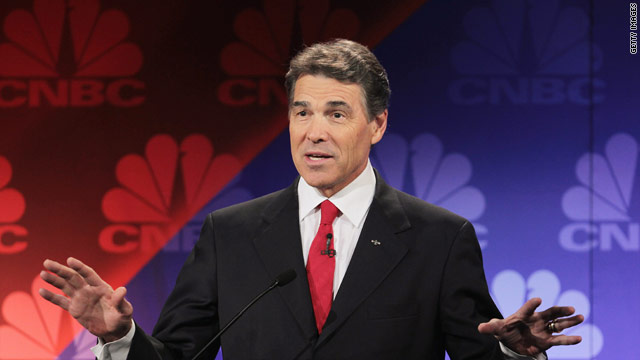 Des Moines, Iowa (CNN)- Some of Iowa's Republican Party county chairmen and women offered forgiving words for Rick Perry's "oops" moment in Wednesday's Republican presidential debate, but virtually all of those contacted by CNN said the gaffe does not bode well for Perry 's campaign.

Perry has staked much of his candidacy on winning Iowa's first-in-the-nation caucuses on January 3, having visited the state numerous times since getting into the Republican race.

CNN spoke to 10 of the party's county chairmen and women. Here are their reactions:

Mark Greenfield: chairman of Iowa's Hamilton County Republican Party, located in the middle of the state

Greenfield, who has endorsed Rick Perry, was critical of the candidate.

"I think this is the end of the road for him. He needed a good debate."

"Those were some pretty important points that he totally messed up. I think it's very detrimental to his campaign.Maybe his message is not as clear as we would hope it would be."

Greenfield said he believes Perry may be able to "redeem himself."

Matt Giese, chairman of the Dubuque County GOP in the east

Does it give Dubuque County Republicans pause on potentially supporting Perry, Giese was asked?

"I think it does. And I think several people in the county kind of feel that way too, that he's really just kind of fallen off - because of all these missteps or he keeps kind of putting his foot in his mouth."

Kevin McLaughlin, chairman of the Polk County Republican Party, the most populous county in Iowa

"I'm impressed with [Perry] as a leader."

"The problem for the governor, in my opinion is, he came in and he wasn't prepared. So that always makes you nervous and susceptible to begin with."

"To me, he's still trying to figure out where he is or figure out all the details on what he's going to do with agencies of questionable value to the American people. And that's just unfortunate."

McLaughlin said it does not spell the end of the Perry campaign.

"He's got money and he's got a message."

Don Lucas, chairman of the Lee County GOP in the southeastern part of Iowa

Lucas was somewhat forgiving of Perry's gaffe, however.

"We're all human beings. When you're put under that stress as human beings, sometimes you have verbal slips."

Jorgenson, who has endorsed Herman Cain, was sympathetic toward Perry.

"What it shows me, and the majority of people I've talked to since the debate, is that Gov. Perry is a human being."

Yet Jorgenson added that Perry's "performances definitely haven't been good in these debates."

Mark Lundberg, chairman of Sioux County GOP, in the western part of Iowa

"My expectations were, when Gov. Perry got in the race, he'd be a really strong candidate. And for the most part, not just last night's debate, but all the debates, he's kind of underperformed my expectations. We've all been in those situations, where the words just don't come."

"All of the candidates have misspoken and had moments where what they said wasn't what they meant to say..but that big pause was pretty extreme."

"It's kind of hard to get beyond the major brain lock that took place there."

"In my view, it's more of the same, with regards to debate performance. And that's obviously not a good thing. I think it's certainly going to be damaging. I think everybody knew he needed to have a strong performance. He certainly knew that. And then it wasn't really delivered."

"I think it was pretty meaningful, given the stakes going in to last night."

"A lot of people I speak with in my county, really believe, at this point, their choice comes down to, 'Who's the most electable?' Not even so much, 'Do I agree with everything they say with regards to unseating Barack Obama?'"

"I think there's some people who had him in their top [tier] that probably do not anymore."

"It told me that he's human. And I almost share that with him."

"I felt bad for him. He hasn't been my choice. But I definitely wouldn't let that affect me."

"I'm sure he feels its unfortunate. Nobody really wants to make that kind of mistake in a national debate. But it's done. And I think we need to move on to the more important issues facing our country.and talk about how we can get this country back on the right track."

"He was doing pretty well. Then, you know, he just kind of had a big brain lapse."

"I would think he'd lose a few more people from that."