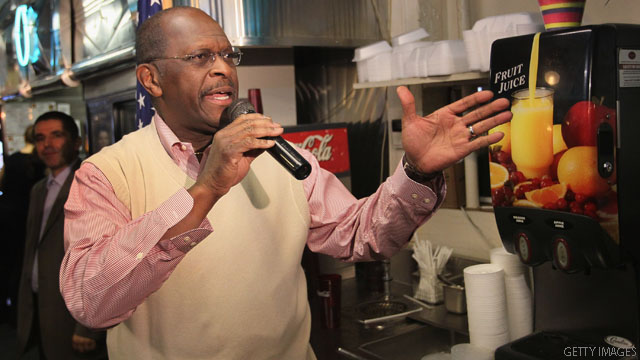 "I apologize for calling her 'Princess Pelosi,' if that's the biggest story you all have, OK?" Cain told reporters after addressing supporters at a diner in Ypsilanti, Michigan.

When asked why he apologized, the former pizza executive said, "So you all will stop asking me about it, OK?"

Cain made the comment in response to a health care question at Wednesday night's debate hosted by CNBC, during which he blamed Democrats in Congress for blocking a Republican health care plan.

"Princess Nancy sent it to committee and it stayed there," Cain said, referencing a bill sponsored by Georgia Rep. Tom Price that was allegedly shelved when Pelosi was speaker of the House.

Cain also apologized for the using the nickname, which he and conservative talk show host Sean Hannity have uttered on different occasions, during a post-debate interview on CNBC.

"That was a statement that I probably shouldn't have made, but I was trying to make a point," he said on CNBC.

At Thursday's campaign stop, Cain attempted to put the onus on Pelosi, recalling a 2009 moment when the California Democrat referred to members of the tea party movement as "Astroturf."

"I remember when Speaker Pelosi called me and the tea party people 'Astroturf,'" Cain said. "I don't remember anybody asking about that story."