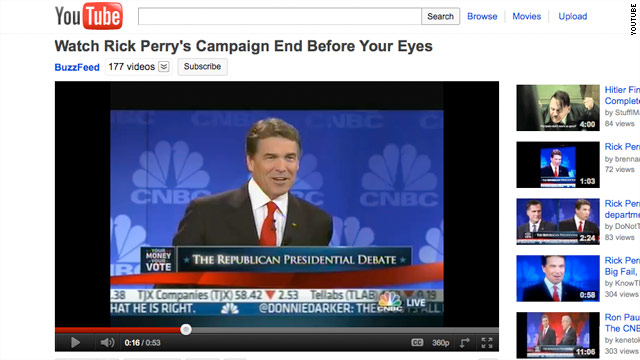 (CNN) - It's been dubbed the "'Oops' heard around the world," and now there's YouTube evidence to back that up.

According to the video share site, the 53-second clip of Perry's stumble during Wednesday night's Republican presidential debate was the top-rising search that night and was the most-viewed YouTube video in the U.S.on Thursday morning.

During the debate sponsored by CNBC, Perry said he would eliminate three federal agencies if elected president - but he was able to name only two.

That produced a painful period of more than 50 seconds during which the Texas governor tried in vain to remember the third federal agency that he would eliminate. It ended only after Perry conceded that he could not remember it - even after appearing to consult his notes.

The clip was most popular in Des Moines and Cedar Rapids, Iowa, the important first-in-the-nation caucus state.