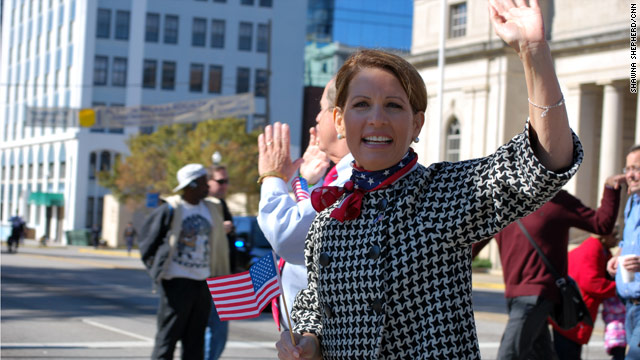 Bachmann: Protesters were 'ignorant' and 'disrespectful'

Columbia, South Carolina (CNN) - Republican presidential hopeful Michele Bachmann on Friday described protesters who interrupted her foreign policy speech aboard the USS Yorktown the day before as "ignorant" and "disrespectful."

"They haven't been told what was done for them and that's what's a shame. And I think that as soon as they would know, if they understood the heavy price that was paid for that First Amendment right, they'd be much more respectful," Bachmann said while shaking hands at a Veterans Day parade in Columbia, South Carolina.

On Thursday, about a dozen protesters caused a stir when they stood up and delivered a coordinated message through a tactic known as a "human microphone," where one person yells out a message and the rest of the group repeats it collectively. A group called Occupy Charleston claimed on its website that it has staged the interruption.

"Blaming people that disagree with you, unpatriotic socialists… this does not help the American people," the group shouted.

The disturbance drowned out the Minnesota congresswoman's remarks, and she briefly left the stage until it was over. When she returned, she praised the group's right to protest.

"Don't you just love the First Amendment? It's great, we have a great country and I want to thank you all for your understanding," she said.

But at the parade on Friday, after a woman unrelated to the group apologized for what happened at the speech, Bachmann talked about the incident with a harsher tone than the one she took the previous day

"I was surrounded by heroes yesterday on the USS Yorktown who paid a big price for them, and they're just ignorant of that," Bachmann responded. "That's all. They're ignorant and they were disrespectful, but you know someday hopefully they'll come to know the price that was applied."