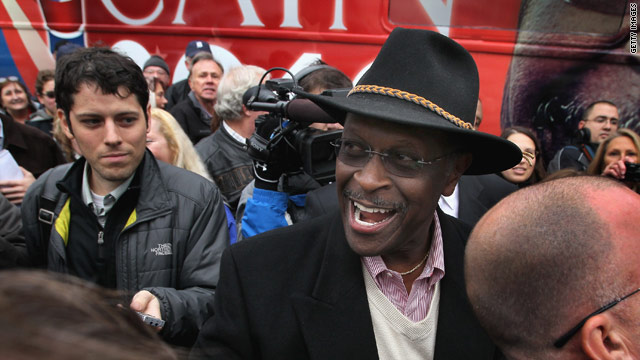 (CNN) – Businessman Herman Cain ranks number one in a survey released Friday, with more than half of likely GOP primary voters saying the allegations of sexual harassment against him will not make a difference in how they vote.

In a real-life illustration of the tortoise-and-hare scenario laid out by Newt Gingrich in an interview Tuesday, the former House Speaker caught up with GOP frontrunner Mitt Romney in the CBS News poll. He tied with the former governor of Massachusetts in second.

But sandwiched between the first and second candidate spots are 17% of Republican primary voters who remain undecided about who they'll support for the 2012 GOP nomination for president.

Cain took the top spot in the survey with 18% support followed closely by Romney and Gingrich who net 15% each. The three-point margin between the top three candidates is with the sampling error for the poll, indicating that Cain, Gingrich, and Romney are statistically tied.

And although 61% of likely GOP primary voters say accusations of sexual harassment won't make any difference in their vote, three in 10 say the allegations make them less likely to support his candidacy for the 2012 GOP presidential nomination, a number that increases by seven when it comes to women.

But Cain isn't concerned with those numbers. In an interview for the Fred Dicker talk radio show, the former CEO of Godfather's Pizza said, "There's good news and bad news in that, the good news is only a minimal number of people have been influenced by the mere allegations... that was to be expected."

"Here's the good news," Cain continued. "I am still right there at the top and I expected Newt Gingrich to continue to move up because he's done a great job at the debates...he's been relentless plus he's got a lot of experience that a lot of people respect."

"The good news is it hasn't destroyed my campaign, it's created a cloud over it in some people's minds, and when people really think about, these are allegations that I faced and categorically denied. I think the reality is going to set in with a lot of people and further down the road, it's not going to be as big a deal as it is."

In fact, Cain's popularity is divided along gender lines and losing among women. The former CEO of Godfather's Pizza has always performed better among women than men, but in late October a CBS poll indicated 28% of women backed Cain, a number that has dropped 13 percentage points in the new survey.

Overall, support for Cain and Romney has declined as Gingrich supporters have slowly increased. Still, seven in 10 state it is too early to say for sure which candidate they will support for
the nomination.

But for his part, Gingrich wasn't overly impressed by his finish in the survey. Following a Veterans Day event in New Hampshire, he told reporters, "I think the real meaning of the poll is when the frontrunner's at 18 and the next two are tied at 15%, it is a wide-open race… I think it'll stay wide open until January."