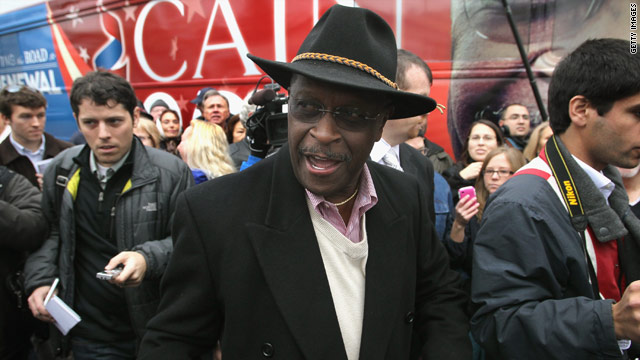 At the fall meeting of the Georgia Young Republicans in Atlanta, Cain said once elected president he would make foreign policy and national security his priority, saying the president's number one job is to protect the nation.

Tonight's debate at Wofford College in Spartanburg, South Carolina will focus on foreign policy and national security, subjects for which Cain has received criticism in the past.

Cain criticized the Obama administration's foreign policy as "foggy" and said the White House is experiencing a leadership deficiency. Arguing that Obama lacks the leadership skills of other great presidents in the country's past, he told the Atlanta group how John F. Kennedy inspired the nation with a space technology plan and the promise of sending a man to the moon.

"He didn't say we might, he said we will," Cain said. "Only for this president to move us back by canceling a major part of the space program. I can tell you we are not going to bum a ride into outer space with Russia"

Battered by allegations of sexual harassment and more recently for making a reference to Anita Hill, the woman who accused Supreme Court Justice Clarence Thomas of making unwanted sexual remarks, Cain kept to his message today touting his '9-9-9' tax plan, He touted himself as the only candidate with a bold economic solution on the table for the country, which includes throwing out the current tax code.

Cain said he had never thought of running for the Oval Office until after President Barack Obama was sworn in, and he saw what he called Obama's "arrogant disregard for the American people."

He also credited God with helping him arrive at the decision to run for president.

"When I finally realized that this was God saying what I needed to do, I was like Moses: 'You got the wrong man, Lord. Are you sure?' But once I made the decision, I never looked back," he said.