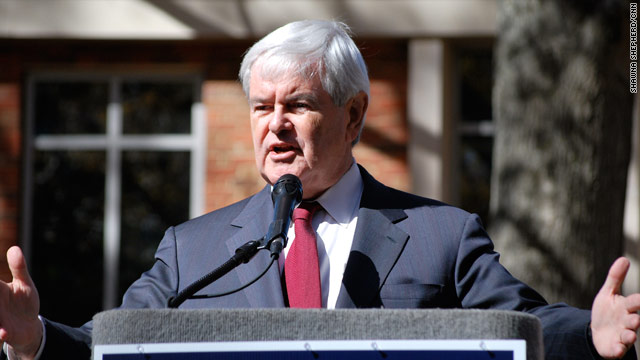 Greenville, South Carolina (CNN) – Newt Gingrich revealed a bit of humility and shared a secret to his debate performances that are contributing to the candidate’s rise in the presidential race.

While campaigning in Greenville ahead of Saturday night’s foreign policy debate, the former House Speaker indicated concern that his reputation as a great debater is a double-edged sword.

“I hope so,” Gingrich replied to a woman who told him he knows more about foreign policy than the other White House hopefuls. “I worry though. Everybody says I do so well in these debates, I’m worried about the debate where I don’t do all that well.”

He shared with the Furman University crowd something that might surprise his competitors: his debate coaches are his young grandchildren.

It turns out the first thing he scribbles on paper when he gets on stage is a smiley face.

“I write a smiley and it has Maggie under it because she’s my smiling coach,” Gingrich said. “And then under that I write ‘Robert, shorter, clearer’ because that’s what he thought was wrong with my answers. I said to him one day what should I improve, he said, 'Well you could be shorter and a little bit clearer.'”

Gingrich’s daughter, Jackie Cushman of Atlanta, was with her son Robert at Furman University and the grand opening of her father’s Greenville campaign headquarters.

The GOP presidential candidate pointed out young Robert who was in the audience taking photos, “So when people say I do well in debates, you’re seeing one of the people who’s guided me to success so far.”

Gingrich spoke to hundreds of supporters who gathered in the parking lot of the campaign office.

“Now people look at me seriously. Our resources are going up, the number of people going to Newt.org every day and donating has gone up astronomically,” Gingrich said. “It's a very exciting time, and I'm going to go into tonight's debate doing exactly what I've done, which is check out the smiley and remind myself of Robert's rules.”