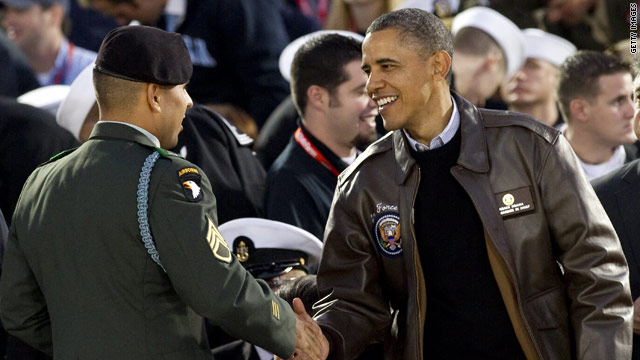 Washington (CNN) - President Barack Obama said Saturday it was an "American responsibility" to improve the dismal jobs landscape facing veterans when they return from duty.

"Today, more than 850,000 veterans remain unemployed. And too many are struggling to find a job worthy of their talents and experience," the president said in his weekly address, delivered from the Navy aircraft carrier USS Carl Vinson, currently at port in San Diego. "As part of the American Jobs Act, I called on Congress to pass a Returning Heroes Tax Credit, which would give businesses a tax break for each unemployed veteran they hire."

The Wounded Warriors Tax Credit, another facet of the administration's jobs bill, "would give businesses a tax break for hiring an unemployed veteran with a disability related to their service in uniform," Obama continued.

The president attended a special college basketball game on the Navy aircraft carrier Friday to thank members of the military and give them "a chance to unwind a little bit" on Veterans Day.

Obama said he was pleased to see "the Senate put partisanship aside and come together to pass these tax credits."

He encouraged businesses to provide job opportunities in the next several years, referring to the growing number of veterans expected to return home as U.S. military engagements wind down.

"In the next five years, over a million service members will transition back into civilian life, joining the 3 million who have already done so over the last decade."

Nevada Rep. Joe Heck, in the GOP weekly address, echoed those sentiments, saying, "we owe it to our veterans to ensure they come home to a strong economy, so they can transition into civilian life and support their family with a good-paying job."

"Last month, the House of Representatives passed the Veterans Opportunity to Work Act, which would provide training and assistance to unemployed veterans, and break down bureaucratic barriers preventing them from finding work," Heck said. "It's smart legislation that members of both parties support, and I'm pleased the Senate passed it."